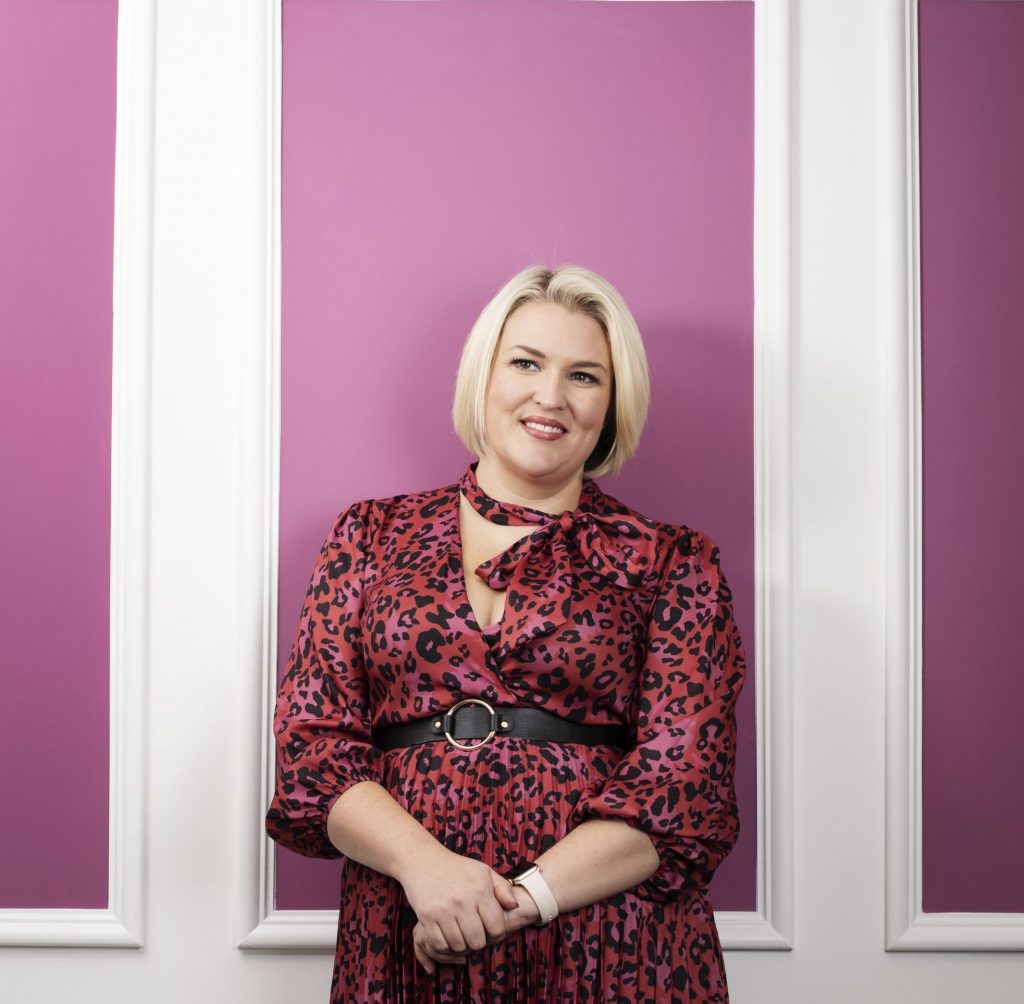 After starting a crafting business from her bedroom at university, Sara Davies has grown Crafter’s Companion into a £33 million global success and is now on our television screens as the youngest-ever investor on BBC’s Dragons’ Den. Here, the entrepreneur from Coundon, County Durham, talks to Alison Cowie about her business journey, the impact her family has made and how she deals with being the minority in the room

Sara Davies, who is one of the most successful and – thanks to her current stint on Dragons’ Den – the most recognisable business faces from the North East – got her first experience of commerce at five-years-old, doing odd jobs in her parents’ wallpaper and decorating shop in the County Durham village of Coundon.

“My dad was a serial entrepreneur who ran lots of smaller businesses,” Sara says.

“He opened the wallpaper and paint shop for my mum and her mum to run and I would help out in the shop after school and at the weekends.

“I thought nothing of a painter and decorator knocking on our front door at 10pm because they had a job early the next morning. We’d just go and open up the shop and sort everything. I think when you live, sleep and breath business, that’s what you do.”

Despite her early introduction to entrepreneurship, Sara initially aspired to be a teacher until in her late teens when she became more involved in the inner workings of the family shop. She chose to study a business management degree in York and became the first member of her family to attend university.

Sara initially felt out of place among her fellow students, the majority of whom had been privately educated.

“I didn’t talk like them and so I went under the radar at the beginning,” reflects the North Easterner.

“Then, I started getting the highest marks in the class and people began noticing me.” During her degree, Sara spent a year in industry and shunned the bright lights of London to work in a crafting business in her home village – where she fell in love with its customer base.

“They were so passionate about the crafts and what they did,” Sara remembers. While on placement, Sara’s entrepreneurial passion ignited, and she went home each night “full of magic and ideas.”

One such idea Sara had was to create a gadget that would allow crafters to make their own bespoke envelopes.

“People were making these beautiful handmade cards but then were asking us where they could buy the right-sized envelopes to put them in.”

With the help of her engineering dad, Sara designed The Enveloper, which allowed crafters to make artisan envelopes. She initially asked if the craft shop she had completed her placement at would be interested in distributing her nifty invention, but the owner declined.

Undeterred, Sara – who by this point was back at university to complete her final year – contacted the QVC Shopping Channel and producers agreed she could present The Enveloper on screen.

“Was I nervous about going on television? Yes, but I knew I had to get over that as it was the easiest way to reach the biggest number of potential customers,” says Sara.

“I just saw it as the same as having a market stall but selling to more people.”

The Enveloper proved an instant hit and Sara sold 30,000 units within three months – after recruiting a fellow university student to build her an e-commerce website and roping in her sister to help her pack the flood of orders. When Sara graduated from university – with a first-class degree – she was already head of a business worth £500,000. Sara continued to dedicate every waking hour to her business and she expanded her product range and reach.

“I was looking at international markets and opportunities within six months of starting the business,” Sara explains.

“I wanted to set up in the US, but I didn’t expect things to happen overnight. I went to the first US trade show to scope out the market and to understand the players who were there, how they operated, what the challenges were and what were the distribution routes to market.

“It meant that the following year I could go to the same trade show and have a strategy in place.”

By 23, Sara had built a £2 million global crafting business, with a staff of ten – including several friends and family. Her achievements had also earned her numerous awards and accolades.

But Sara was soon to face some of her most challenging times. In 2007, Crafter’s Companion entered into a huge legal dispute with major stationer Helix, which had launched a copycat envelopemaking product.

The escalating legal costs – which ran into thousands of pounds – took its toll on Sara.

“I’d never worked anywhere else in my life and I was running the business on goodwill and excitement,” she remembers. “I started to think, ‘Am I really cut out for this?’”

It was at this point that Sara’s long-term boyfriend – now husband, Simon – joined the business.

“Simon had built up a corporate career and gone through a lot of management training,” Sara explains. “He came home one day and told me he’d handed in his notice. Simon joined Crafter’s Companion and started to take on more of the day-to-day running of the business and the management. This freed me up to concentrate on the entrepreneurial stuff and business development. It’s proved a fantastic partnership.”

Crafter’s Companion eventually settled its mammoth legal dispute out of court (the company has since successfully defended the patent a further five times), which allowed Sara and Simon to concentrate on the growth of her business.

But then the global economic crisis hit. Sara describes “working twice as hard to stand still” during this period and, having developed successful operations in the UK and US, chose to concentrate her efforts on the home market.

But once the US economy had recovered, Sara set her sights on building up her market share Stateside, acquiring a small Californian crafting business in 2011.

“It meant we could develop our own culture over there,” says Sara. The acquisition has proved a savvy move and after nurturing the business for a few years, US sales for Crafter’s Companion have rocketed from $3 million to $24 million.

Around three years ago, Sara – who is now a mother to two children – made the bold decision to take Crafter’s Companion from a £10 million to a £100 million company.

“We saw that we’d become one of the biggest players in our market but if we really wanted to push the business on, we had to grow that market and invest in the next generation of crafters,” says Sara.

“That didn’t mean just young people but people who had never considered crafting before.”

Crafter’s Companion has since opened stores within garden centres in Evesham and Chesterfield – adding to its store in the US and head office and flagship store in County Durham – which not only sell crafty products but run workshops and demonstrations for people to learn everything from card making to sewing.

This is in addition to the company producing numerous instructional films that are shared via its social media channels.

Sara reveals the company is expecting to turn over £44 million at the end of this financial year and it recently took on its 200th member of staff – the majority of whom are based in Newton Aycliffe.

Asked about the opportunities she’s created in her home region, Sara says: “I’m a North East girl through-and-through and I’m very proud to have brought employment and economic prosperity to the area I live.”

Another proud moment for Sara occurred in 2016 when she received a letter from Buckingham Palace to say she’d been awarded an MBE for services to business.

Sara and Simon decided to take their family and close friends for dinner that night where they told her biggest supporters the news.

“Seeing how proud they were that night was ten times better than any feeling I’d had,” the entrepreneur remembers fondly.

Being given an MBE in her early thirties also had an additional impact on Sara.

“I thought an MBE was something you got when you were in your 60s or 70s – after you’d given a lifetime to business – but here I was at 32, with one.

“It made me realise that things don’t have to happen at a certain age.”

This realisation played a part in her decision to join the UK’s most famous business pitching process – BBC’s Dragons’ Den – where she became the youngest ever Dragon to join the panel.

Sara’s investment journey had started a few years earlier when she was asked to join a pioneering group of all-women investors based in the North East.

“Joining Gabriel Investors made me understand the process of investing and how it works. I gave me a flavour and I loved it,” says the extreprenuer.

When Sara got the call to audition for Dragons’ Den – which had been her favourite programme at university – she remained mindful of the impact the inevitable rise in profile and scrutiny the programme would bring.

“I discussed it with my family and initially they were nervous about me joining Dragons’ Den,” Sara admits. “But a while back I had met [former Dragon] Duncan Bannatyne in the pub and we had chatted for a while. I remember thinking, ‘yes, he’s on the television but first and foremost, he’s a businessperson.’

“As a family, we decided that I should do the show and that we would manage what came as a result.”

Sara finished filming the 17th series of Dragons’ Den in June and has loved every minute so far.

“When people walk out of the lift, you know nothing about them. The last thing you’re doing is thinking about camera angles. You’re thinking if I’m going to give them some of my hard-earned cash, I need to get under the skin of this business so I can make the right decision.

“You forget the cameras are there.”

This passionate yet practical attitude has allowed Sara to thrive in environments where she has, “ticked a lot of minority boxes.”

She explains: “Throughout my career, I’ve often been in the situation where I’ve been the only woman, the youngest person or the only one from the North East. But, because of that, I’ve often been underestimated.

“I’ve learnt how to adapt my style to earn people’s respect. Having someone’s respect in business is essential – no matter your gender, age, or where you come from.

“My advice to anyone in business is to be flexible while staying true to yourself.” Wise words from the 35-year-old.

The power of perseverance