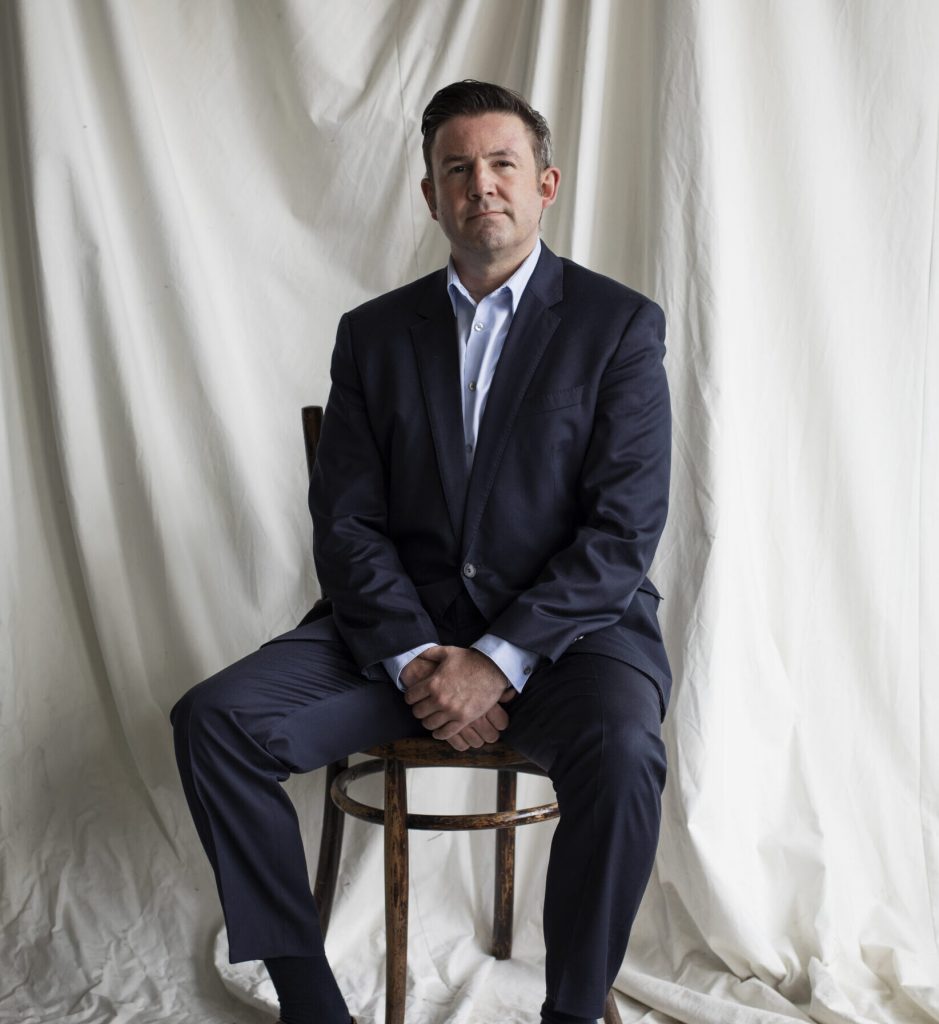 As a youngster born into an Army family, Jonathan O’Halloran divided his formative years between Britain and Germany. A keen footballer, he dreamed of life as a professional, but when the scouts failed to come knocking, he found a new career goal in science. Fascinated by genetics and struck by the ravaging effects of viruses and plagues on the global population, he became driven to deliver a step-change in disease testing and treatment. Now, as Newcastle-based QuantuMDx Group, the firm he co-founded in 2008, rolls out apparatus capable of providing millions of coronavirus tests every week, he speaks to Steven Hugill about its game-changing technology, his business journey and why the North East is the perfect place to grow a company

Germany’s footballing pantheon has yet to reserve a spot for Paderborn.

The Westphalian cathedral city may date back more than 1200 years, but its achievements on the country’s soccer pitches aren’t quite so historic.

Though SC Paderborn 07 – formed from a merger in the 1980s – dines among lavish contemporaries at Germany’s top table, it remains slim pickings on the global stage.

The club might not yet have made an international impression, but someone with first-hand experience of the city’s footballing journey is leaving an indelible mark on the world.

Taken to Germany by his father’s British Army commitments, a pre-teen Jonathan – known as Jono by those closest to him – supplemented kickabouts among friends with more structured matches through the club.

A left winger with a striker’s instinct, he was – to tweak football commentator parlance – a Jono-On-The-Spot figure, always in the right place at the right time to help his side’s attacks.

Like a lot of youngsters, he harboured dreams of playing professionally, but when they failed to materialise, Jonathan found a new career outlet.

Instead of being a totemic figure on the pitch, he is now at the vanguard of next generation healthcare technology, which is leading the charge to transform disease detection and treatment.

At a time when the world’s medical services are battling against the coronavirus pandemic, Jonathan is, to return to that football phrase again, Jono-On-The-Spot.

Already known for work alongside Bill and Melinda Gates’ foundation to improve tuberculosis detection and treatment, and the development of a panel test to prevent the spread of sexually transmitted infections, QuantuMDx recently launched a coronavirus test for laboratory use.

Working with manufacturing partner Biofortuna Limited, QuantuMDx – operating out of the Lugano Building, on Newcastle’s Melbourne Street – says the test is able to deliver results in little more than an hour.

It has scaled up production capability to an initial two million tests a week, with capacity to slide that figure up to three million.

The test, known as a SARS-CoV-2 assay, has been developed using advanced bioinformatics, with its accuracy validated by use of 90 pre-extracted residual samples from Newcastle upon Tyne Hospitals NHS Foundation Trust.

Shown to be clinically equivalent to the comparator assay presently used in NHS hospitals, QuantuMDx is now translating the test and a respiratory panel on to its landmark Q-POC platform.

A cost-effective, portable and battery-operated molecular diagnostic tool, Q-POC can analyse patient DNA samples in – depending on the complexity of a test – as little as ten to 30 minutes.

Such expediency and portability mean QuantuMDx’s coronavirus tests could potentially be analysed in as little as 15 minutes in hospitals, pharmacies, care homes, schools or immigration zones.

For governments around the world, the development stands quite literally as a life-changing intervention in their efforts to ramp up contact tracing of COVID-19.

With potential for use in airports to quickly test travellers, it could also help the global sporting landscape emerge from its coronavirus shutdown.

“With Q-POC, people doing the contact testing can put it in their backpack, go and swab people, test them and get a result immediately,” says chief executive Jonathan.

“That is an obvious game-changer.

“In airports, if someone comes through and they’ve got a fever then they can be quickly tested.

“It could be used in sporting environments and by the big banks and supermarkets, which want staff back safely but quickly,” continues Jonathan, who reveals the company is now looking at honing its strategy again to deliver early testing for flu and SARS.

“We’ve got a device the world needs; it is a silver lining to a large global cloud.”

Yet it could all have been so much different.

As a youngster, it was football, rather than genetics, that piqued Brightonian Jonathan’s interest.

The son of a Liverpool FC- supporting mother and a father whose family followed the fortunes of Millwall, he was always destined to fall for its charms.

But when he returned to the UK from Germany, the landscape began to shift.

“I was in a bit of an Army bubble in Germany; I grew up on lots of different bases and remember playing lots of football,” recalls Jonathan.

“We moved back when I was 13 and I began at a private school in Lewes, east Sussex.

“That was a bit of a culture shock; I went from an Army school to somewhere that was very prim and proper and even made us do homework!

“When I was 16 or 17, I realised my dreams of professional football were not destined to succeed and that I needed to do something else,” continues Jonathan, sipping tea from a Liverpool FC mug.

“I was colour-blind, dyslexic and tone deaf, so I quickly found the arts were not for me, and instead I clicked with science.

“I remember a teacher showing us an experiment one day and I got it immediately – I was quicker than all of the smarter kids in the class to understand genetics.

“From that point on, I knew what I wanted to do.

“I looked at all of the universities for a straight genetics degree, but not of them did one, so instead I studied molecular genetics with biotechnology at Sussex University.”

His academic journey continued when he was accepted into the esteemed Harvard University to study how mutations in DNA sequencing cause disease.

If his school science lesson prompted an interest in genetics, Jonathan’s time on the other side of the Atlantic truly crystallised his career path.

“I benefited from an amazing education over there, but it became pretty obvious when I started writing my thesis that the academic life wasn’t for me,” he says.

“At that time, I was reading a lot of books on epidemiology and about how viruses and plagues can wreak havoc globally.

“I realised pretty early on that we needed to improve work on human diagnostics.

“So I applied for jobs in laboratories and got one at Nuffield Health, in Tunbridge Wells,” continues Jonathan.

“That gave me exposure to a lot of pathology disciplines, and I got to play with a lot of devices.

“After about four years in, I thought, ‘I could build one of these’.”

And that is exactly what he did.

QuantuMDx began life not in a high-tech, modern laboratory, but in Jonathan’s Sussex garage.

Now backed by medical entrepreneur Elaine Warburton, who helped Jonathan co-found the venture, he began laying the research foundations that would set the business on its trail to present-day success.

It was also around this time that the company secured a grant from the Cape Biotech Trust, which saw Jonathan relocate to the southernmost tip of Africa.

The move – albeit for a transitory period – would prove to be another seminal moment in Jonathan’s professional life and the evolution of QuantuMDx.

“While I was getting the data in my makeshift laboratory, Elaine – who is now a non-executive director – was raising money for the business on the back of that data,” he recalls.

“We received funding from Cape Biotech Trust and part of the deal was that we had to move to South Africa’s Tygerberg Hospital for two years – so I packed up the garage and went.

“We were based right next to the World Health Organisation’s tuberculosis laboratory.

“On my coffee breaks I was having discussions with its scientists about tuberculosis.

“I couldn’t get my head around the disease. It was killing millions of people every year, so I started learning about genetic mutations that were stopping treatments from working.”

When changes to funding requirements forced Jonathan and Elaine to return to the UK earlier than planned, the duo found a home in the North East.

Providing the company with a much-needed base, the residence – close to like-minded operators and an ever-flowing stream of highly- skilled university graduates – provided crucial momentum, which QuantuMDx has more than maintained from its Lugano Building site.

“The quality of students and the catchment area we have is quite large,” says Jonathan, who now counts more than 70 staff on QuantuMDx’s books.

“People from the North East want to stay here; they don’t want to go off to Oxford or Cambridge, and that is such a huge benefit for us.

“Furthermore, every time we put a call out to the universities for support, they all say ‘yes, we can help, we’ve got a group doing that’.

“We have really meshed ourselves into the local life sciences sector.

“Speaking as a soft southerner,” he laughs, “Brighton is supposed to be this wonderful city, but it is nothing compared to Newcastle.”

This strong ecosystem and interest in QuantuMDx’s ever-evolving revolutionary technology, leaves Jonathan in no doubt where his business is headed.

“I always had a vision where this company would be,” he says.

“If we get the execution right, we are starting the commercial growth on a path towards becoming a unicorn [the term used to describe a privately-owned start-up company valued at more than $1 billion].

“We have evolved our strategy for coronavirus; we have honed it and we are now doing it.

“We are poised for rapid growth; it is going to be a very exciting time for us over the next 18 months.

“We are going to be a different company again.”