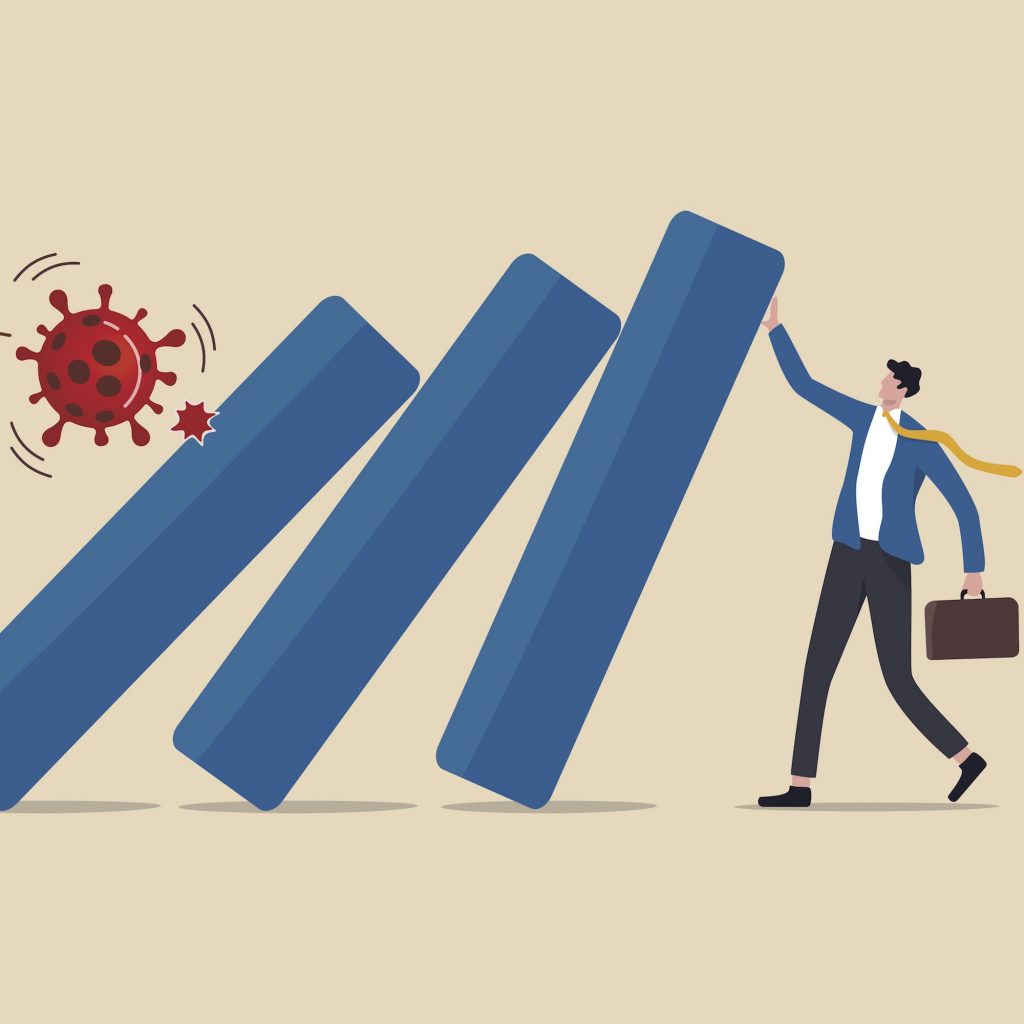 With new figures showing the coronavirus pandemic has pushed the UK into a fiscal tailspin not experienced since the global financial crisis, the Government has admitted it is very likely the country will endure a significant recession this year. Here, Steven Hugill looks at COVID-19’s bruising impact and asks what measures are needed to help nurture the UK’s economy and business environment back to health

‘It’s not goodbye, it’s see you later’, reads the homemade sign in a charity shop’s window.

The message might be rudimentary in creation – letters are printed on separate A4 sheets – but it is layered with meaning.

A reflection of the sheltering observed by millions to weather the COVID-19 storm, it equally strikes a defiant tone about a future society – and country – being reunited again.

However, if you look a little closer, another picture emerges.

Beyond the sign’s sun-faded curling edges, the store stands in silence, its wares, like many other retailers, untouched for weeks and blanketed by a film of dust.

The shop, like so much of the UK, is in a state of suspension.

When the Government unfurled its coronavirus lockdown strategy, the country’s economy entered an immediate stasis.

While the UK might now be gaining a modicum of vigour – at the time of going to print, outdoor markets, car showrooms and non- essential retailers had Government approval to reopen in June – the financial landscape remains extremely perilous.

Indeed, Chancellor Rishi Sunak has admitted it is “very likely” the UK is already in a “significant recession”.

Nowhere was his warning more emphasised than in an Office for National Statistics (ONS) report, which showed the UK economy – during the first quarter of 2020 – had contracted at its sharpest rate since the global financial crisis.

According to its figures, UK gross domestic product dropped two per cent between January and March.

The period marked the beginning of the country’s response to the COVID-19 outbreak, with widespread retail and hospitality closures supplemented by pauses across the manufacturing and construction sectors.

Such action, say the ONS’ findings, saw the services sector, which includes hotels and restaurants, endure a record 1.9 per cent drop in output.

Production and construction were down 2.1 per cent and 2.6 per cent, respectively.

So, with such figures, and economists predicting an even larger slump in the current quarter, what action must be taken to help the pendulum begin swinging back towards growth?

“If people have confidence that trade will start again, that they will have jobs and their businesses can survive the recession shock, then they feel more confident and they will spend and invest, both of which are essential for future growth,” says Andrew.

“Businesses must have access to cash to fund their working capital once they become active again.

“The Government needs to ensure the Coronavirus Business Interruption Loan Scheme is made easier to access and that businesses know they will have access after the lockdown has ended and trade has started again.”

He also says the situation demands much- needed clarity around key uncertainties such as the UK’s departure from the EU.

“Risks exist from factors such as Brexit, exchange rate fluctuations and interest rate increases,” says Andrew, “so information flows and targeted support could be used to mitigate these.”

For Ian McElroy, chief executive at Newcastle-based wealth and investment management firm Tier One Capital, the situation requires caution as the UK takes a “long march back to ‘normal’ human behaviour”.

“As we near the midway point of 2020, it remains difficult to predict what the rest of this year and beyond might have in store,” he says.

“For now at least, equities have found some kind of equilibrium, with a consensus forming that economic damage caused by the pandemic has been offset by monetary and fiscal stimulus.

“I remain cautious with so much uncertainty out there and it remains to be seen how unemployment affects consumer-led economies like the UK and US.

“Current conditions do give us an opportunity to re-balance our portfolios to take on more risk and we are in the process of moving our tactical position from neutral to the upper limit of our risk parameters.

“But we remain patient and are happy to make moves at our own pace.

“Our analogy is that we remain in the middle lane of the motorway, moving through a tunnel, but are ready to manoeuvre into the fast lane when we see light.”

However the return to post-coronavirus normality ensues, Andrew, whose company has offices in Gosforth, Morpeth, Thornaby and Durham City, says businesses have an integral part to play by embracing operational changes triggered by COVID-19.

Praising the Government’s furlough scheme for being “brilliant at preventing redundancies”, he says it is imperative organisations begin finding ways to safely return staff to work, even if it means adopting new practices.

He adds: “The Government has gone much further than many of us would have expected (but) we cannot expect this support to be totally open ended, nor can we expect to simply go back to how it was.

“All of us have a responsibility to get the economy going while ensuring we look after and protect each other.

“This will take effort, teamwork, compromise and an acceptance of change.

“We all have a part to play in making it happen.”