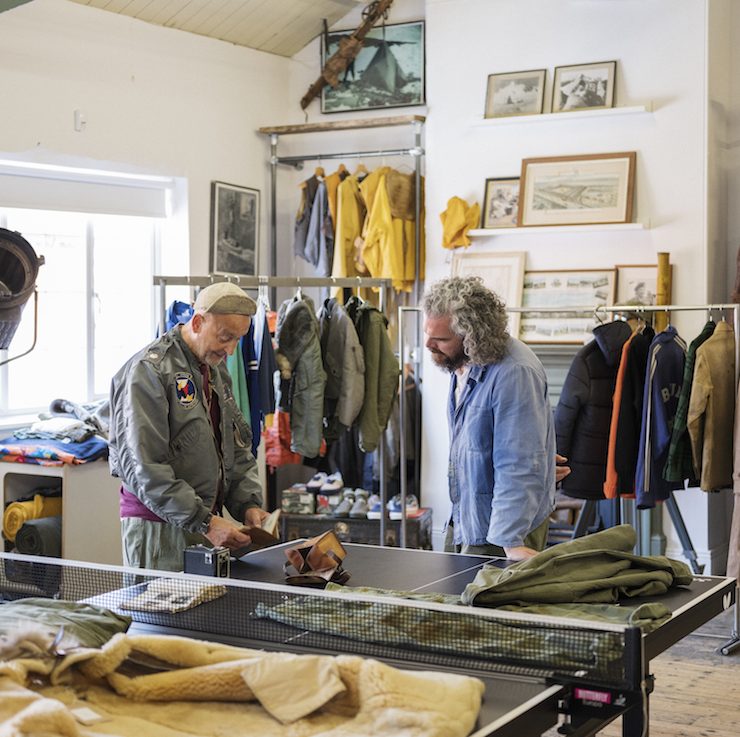 Internationally renowned clothing designer Nigel Cabourn is used to travelling the globe in search of inspiration for his unique collections. But when the COVID-19 pandemic struck, his world was literally turned upside down. With his accustomed ability to source vintage garments and fabrics from all corners of the earth impeded, he instead turned to David Uddgren-Young and the riches of his COMMON ILKE VINTAGE store to maintain momentum across future ranges. Here, Steven Hugill learns how, while preserving the crucial fabric of human connection during detached times, their work is tacking out a framework for long-term success.

Nigel Cabourn rises from a leather chair, spins on his heels and walks with purpose to a cabinet at the far end of his office.

Opening one of its doors, he finds what he’s looking for with ease.

“There they are,” he says, his voice full of pride as he unfurls a glossy print of footballers Jimmy Greaves and Lev Yashin.

The image, now flat on Nigel’s desk, captures Greaves, eyes fixed and thigh muscles bulging, looming over Yashin as the Soviet Union goalkeeper smothers the ball with his gloved hands.

“This is one of my favourite pictures,” says Nigel of the shot, which carries Greaves’ signature and was taken during a match at Wembley in 1963 between England and a Rest of the World XI.

“He was a big giant was Lev,” continues Nigel; “I’ve loved the guy for 60 years.

“He looked so dramatic because he always wore black – Lev was different, and it was because of him that I wanted a ‘keeper’s top when I was a kid.

His adoration is obvious, but it extends well beyond simple fandom; for Nigel, they are not men of black and white yesteryear but heroes of the present day, their feats and accomplishments, their daring exploits and free spirit informing his thinking and catalysing his creativity.

His surroundings tell as much.

To his right, an unzipped coat hangs off the shelf of a heavily populated bookcase.

Known as the Everest parka, it is one of Nigel’s most recognisable pieces, and exudes vintage sport and adventure.

Inspired by a down jacket worn by Sir Edmund during his 1953 expedition to the world’s highest mountain, this version of the revered garment keeps up the exploration theme, having been used by TV presenter Ben Fogle on his own small screen Everest challenge.

On shelves nearby, thick, hardback tomes celebrate the life of Scott, prompting Nigel, when his eyes catch their titles, to recall out loud the Antarctic adventurer’s stimulation of a previous collection.

Now looking over his shoulder, Nigel – whose interest in vintage was sparked when a young Paul Smith showed him a British Royal Air Force jacket, bought from a Paris flea market in the late 1970s – nods to a poster of maverick driver Hawthorn, whose flair and style helped motivate the look of a recent summer range.

And then, with a smile, he returns to Lev, revealing he’s working with an unnamed football club on an exciting new range, which will join a partnership with English sports brand Umbro on a line of classic sports tops and pants, and another with skateboard label Vans on a unique range of trainers and clothing in the Cabourn portfolio.

With decades in the design industry, such partnerships are now de rigueur for the keen tennis player, whose back catalogue also includes a collaboration with British marque Fred Perry.

So too are regular trips abroad, a well- thumbed passport evidence of time spent in Asia and Europe sourcing vintage items and fabrics for inspiration across future works.

Or at least they were until coronavirus struck.

When the UK entered its first lockdown in March last year, Nigel – who studied fashion at college in Newcastle during the 1960s and founded his first business while on his course – was grounded.

His solution was to look – and shop – local, specifically in the direction of David Uddgren-Young, the man behind Tynemouth Station-based curated menswear and goods supplier COMMON ILKE VINTAGE.

Their alliance was an instant success, with David sourcing garments, such as 1950s Korean War era clothing and vintage varsity jackets, that have helped – and continue to shape – the look and feel of Nigel’s 2023 spring collection.

Walk the wooden floor of Nigel’s North East base and their work together becomes even more striking.

In the shadows of First and Second World War pilot jackets, which hang high on the building’s far wall, rails of vintage military clothing stand ready
for inspection. Where their camouflage markings once served as a shielding mechanism, today they expose stories of conflict, of notable junctures in decades past, of lives lived and lost across the globe. A good number have been sourced by David, and the theme continues when you enter Nigel’s office.

Referred to by its owner as his “library”, a selection of items, including a World War Two US Marine Corp shooter jacket and a 1960s British Army raincoat – both found and supplied by Dave – and a Second World War paratrooper smock loaned from a global contact, lie bookmarked as future stimuli.

“I normally travel six months of the year and get to Japan four times a year,” says Nigel, who initially visited David’s shop with his France-based womenswear designer Emilie Casiez.

“But in the last year-and-a-half, I’ve only managed to get to Italy, Portugal and France.

“It’s all been so different – usually, I’m buying vintage clothing in all the places I go,” continues Nigel, whose expeditions are reflected in colourful beads that hang from his neck and circle his wrists.

“I do all of the trade shows and go to Florence, Prato, Paris and Milan.

“On my last trip, I went to a menswear trade show in Florence and bought vintage and then went to Prato to buy fabric from one of Italy’s best designers, who took me to a couple of very rare collectors with warehouses full of vintage.

“But I’ve been restricted since March 2020 and that is why Dave has been such a lifesaver,” says Nigel, who is now wearing the aforementioned rain jacket inside out to show off its stitching and detail.

“I told him I was working on the Korean War, and he has gone out and found me pieces. He’s got me some great US stuff and actual things from the Korean conflict,” adds Nigel, who has a number of stores in Japan and sees his collections stocked by retailers across Europe and Asia.

For David, who originally set up a clothing store and website in Greater Manchester following a 20-year career in menswear, working with Nigel represents a “massive” moment.

His own vintage journey began when living in Camden, London. With the borough’s markets on his doorstep, David picked up the same affection for vintage and clothing with age and added meaning as Nigel, and taught himself about their relative histories, particularly military outfits.

“When we relocated to Tynemouth and opened the store in October 2019, Nige came along to the launch day, and I was absolutely buzzing that he did so,” says David.

“We’d met previously at trade shows, he’s a hero of mine in the industry, and is without doubt an icon of the industry, so to be working with him is quality.

“Nige arranged a private appointment with Emilie in the store, and I pulled out all the kit I thought they would be interested in,” continues David, whose shop includes items from Cabourn collaborations with Henri Lloyd and skateboarding name Element.

“They had the place to themselves and picked out a lot of garments for inspiration.

“Some of what they were looking for I already had, such as Korean War era garments and British military, and I later sourced specific items like a deadstock World War Two US Marine Corp duck camo poncho.

“I’ve always sourced vintage military, hunting and workwear, but Nige coming into the store upped the ante because he wanted a lot of rare and wonderful things,” adds David, whose rails also include brands like Filson, Red Wing and Yogi Footwear, alongside the vintage kit.

Indeed, such has been the impact of their work together that Nigel is now working in collaboration with Yogi after seeing its new collection in David’s store, which has resulted in them working together on a range for spring/summer 2022.

“I feel like what we’ve done over the last 18 months has really put the building blocks in place to continue growing our relationship for years to come, both professionally and personally,” adds David.

Nigel, now changed into the paratrooper smock and posing for an Instagram-bound picture, is equally ebullient.

“Every time I go and see him, Dave gets me great pieces,” he says.

“He’s catered a lot for me; he’s got a top operation. “I get an incredible service from him.” 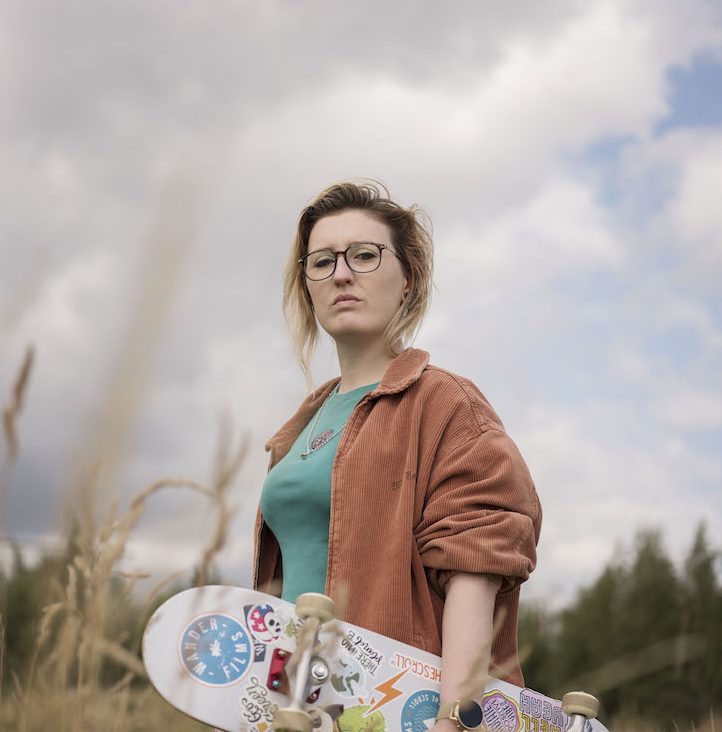