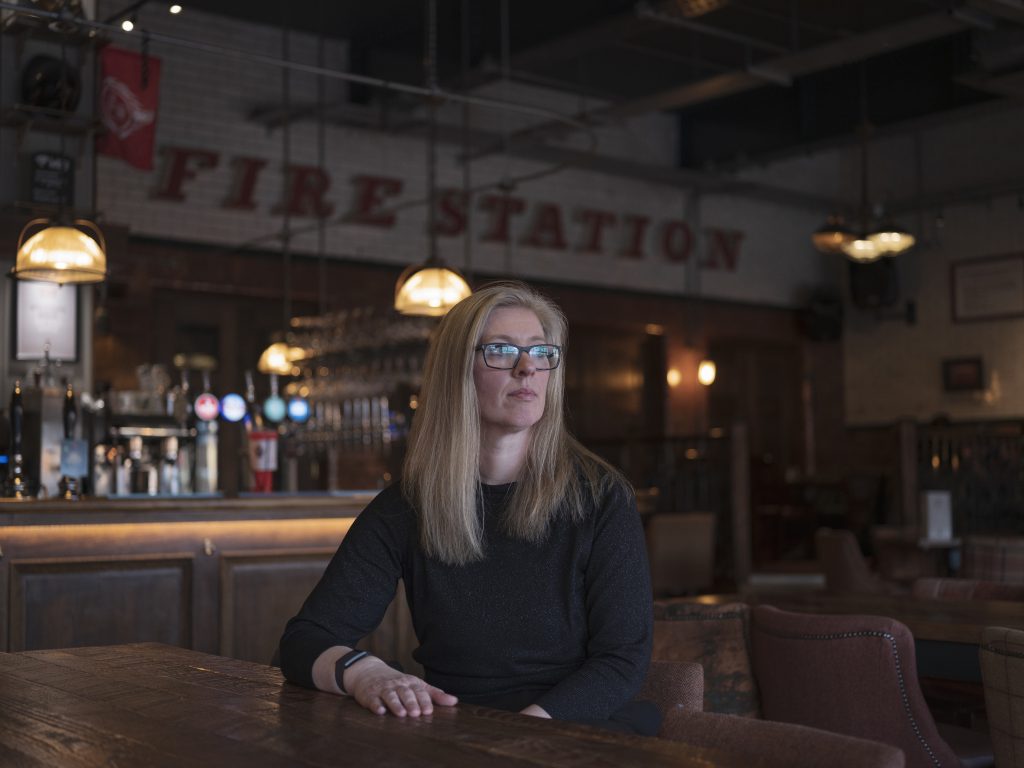 The £18 million transformation of the century-old derelict former fire service headquarters in the centre of Sunderland is more than money well spent. It is an investment for Sunderland’s cultural future and the opportunity to play on the world stage. Award-winning architects Flanagan Lawrence, which designed Sage Gateshead, has created another gem, inside and out, for international performers and local audiences to embrace. Next door to Sunderland Empire, and nestled between The Peacock and the Dun Cow, two of Sunderland’s oldest and grandest pubs, The Fire Station is ready to step from the shadows to bring new music and new experiences to a very fresh clientele. Inside the impressive Edwardian building – adorned with repainted original fire station symbols and complete with extension – the old engine forecourt has metamorphosed into a bar and restaurant, with studios and heritage exhibition space upstairs, and a main auditorium capable of hosting an audience of 550 seated and 800 standing. And after finally opening its doors for the first time at the end of last year, Colin Young meets the woman handed the task of putting the venue on the world live music map.

Tamsin Austin was head of contemporary music at Sage Gateshead for 17 years. She helped build the glistening riverside venue into an iconic setting for the world’s finest musicians and performers. And now she’s ready to do it all over again in Sunderland. Because the temptation to take a new role in the cultural quarter on Wearside, and start afresh in a new venue to put the city on the international music and entertainment map, proved too much for Tamsin. And it was a cycle ride into Wearside, through the Tyne Tunnel, from her home in Wallsend, that persuaded her to make the brave decision.

“I wanted to get a sense of what Sunderland is like,” she says. “I know the north of the Tyne really well, but I didn’t know Sunderland at all, so I thought, ‘I’ll get on my bike, ride around a bit and see how it feels’. “And it felt like a hidden gem. “I remember cycling home via Roker beach and up to Shields, and it was just beautiful. “I am quite a fan of second cities, because I grew up on the outskirts of Stockport – not Manchester – so I know there is a big difference. I’ve always liked the underdog. “Since Sunderland went for UK City of Culture in 2017, and didn’t get it because Coventry did, a head of steam has developed through all the partners in the city who deliver culture. “The formation of Sunderland Culture as a catalyst for change in the city and partnership model to deliver culture is really exciting and there are a lot of people really invested in making a positive change.”

When she saw The Fire Station for the first time, Tamsin was greeted by a building site. Add in the ongoing pandemic and supply issues, and it would be another 11 months before she was handed the keys as venue director. Which just happened to be on opening night…

Born in Stockport and brought up on Dylan, Baez and Mitchell in the Peak District by her folk musician parents, Tamsin was among the final intake of Northumbria University performing arts students. She joined Kathryn Tickell on tour, not as a fiddle player, which is her forte, but selling t-shirts from the merchandise stall and later lived with the singer in Newcastle, getting a job at the Riverside; she saw early Oasis. Tamsin, who is deaf in her left ear and partially lost some of her hearing in her right ear after contracting german measles as a baby, started at Sage Gateshead as music programmer. Her task was to attract renowned artistes to a new venue, in a place many had never heard of – which may sound familiar…

She says: “You’d be on the phone to international agents who might know where Newcastle was but had no idea where Gateshead was. It took time before the phone started ringing. “Gateshead appears regularly on tours now and that’s what we’re looking to set up with Sunderland. But it takes time. “That first year in Gateshead took real hard work, piling down to London for meetings with the right people
to establish that reputation and gradually, as we started to make things happen ourselves, people started to take notice.

Sunderland Culture appointed Tamsin venue director in February 2021 and, just as she was 17 years ago, she was handed a blank piece of paper. Only this time, it was somewhat larger. 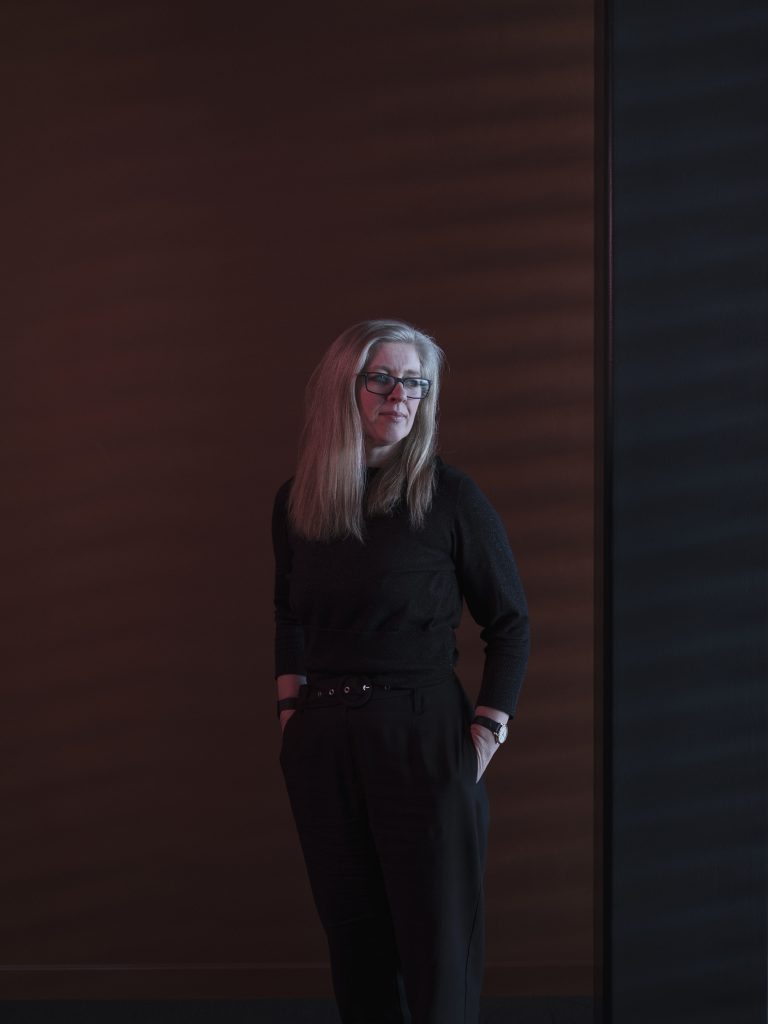 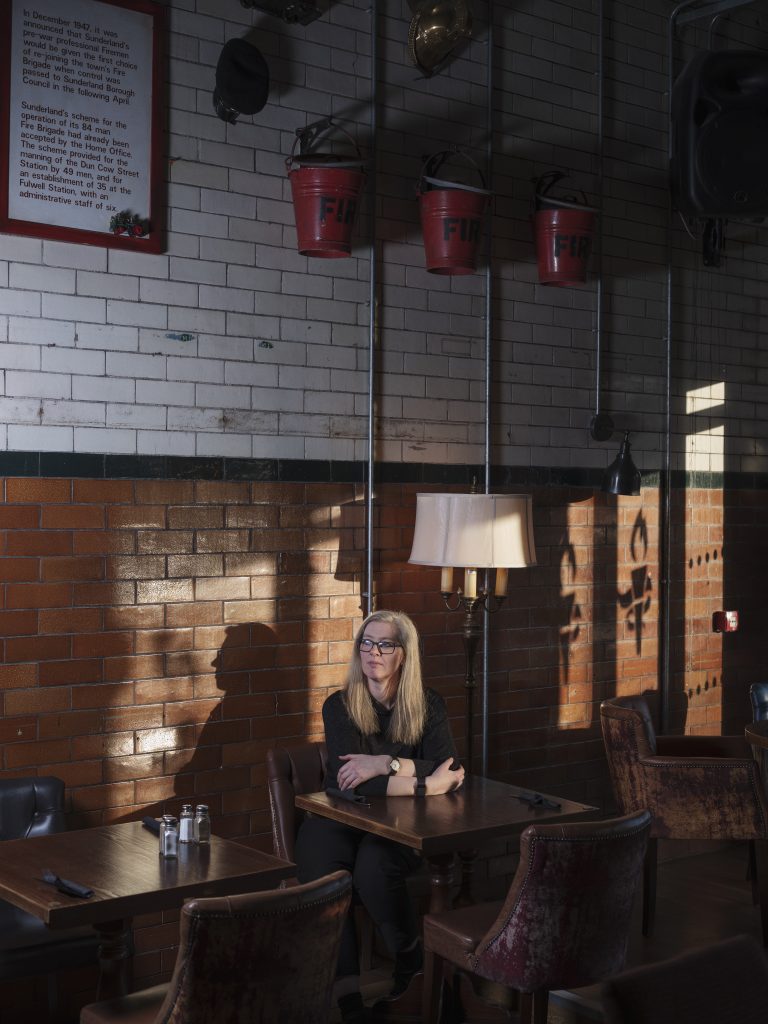 “When I was head of contemporary music, the focus was on the programme, so this has been a whole new challenge,” she explains. “I’m venue director, so I’m overseeing everything. “It was a blank page for every aspect of the business and operations, so it’s been a learning curve but one I’ve really enjoyed. “I felt I was ready for a change and a new challenge. “I was at the Sage from the beginning, so I had experience of going into a new building and setting up a contemporary programme from scratch.

“I just thought I could do it all again but here in Sunderland. “I did get some jokey comments from old music industry colleagues who thought I was going to work for the fire service, like, ‘are you going to be flying down poles?’ “And I think some people were surprised I’ve gone to a smaller venue, but I said, ’yeah, but look at it, it is beautiful’, and a lot of the fun stuff happens at this scale. “We can do 550 seating and 800 standing. It’s quite intimate, which is lovely for the artist and audience. I like this scale. “We’re a small core team of nine and I love working with all of my Sunderland Culture colleagues – they are really creative and hardworking and love making things happen and making people and artists happy. It’s a great environment to work in. “But what also attracted me to this spot is that it’s at the heart of a hugely creative hub. “We have the Peacock next door, which holds about 200 and there’s the Empire next door with 2000. “And there’s great independent venues on the doorstep like Pop Recs and Independent, all with inspiring people at the helm.

“Sunderland has a fantastic music and performing arts scene and some great artists at its heart. “I’m really excited to be working with creative people right across the city to help develop the current – and future – generations of musicians. “There’s great potential within this cultural quarter to run festivals across the auditorium and both pubs, and we’re developing a new parade ground at the back with an alfresco bar and outdoor stage, so we can have concurrent indoor and outdoor stages. “It is the perfect combination of spaces to showcase local, national and international talent. “I’m a real believer in collaboration and having a real can-do attitude if you want to make something happen.” 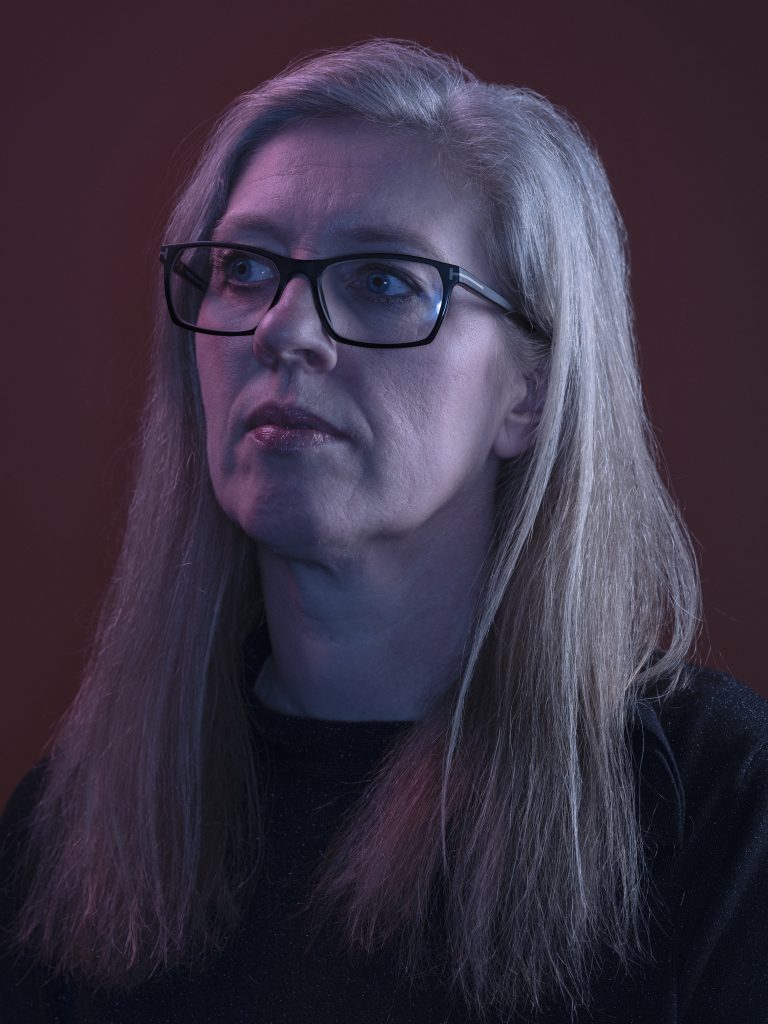 It’s that attitude which has seen Tamsin through the last two years, including putting together her new team without actually meeting them, while home schooling boys Jim, 13, and Louis, ten, and walking English pointer Luca.

“I built the team on Zoom,” she says. “It was just bonkers.
“Starting a new job to open a new venue within a few months, putting a team and a programme together, while overseeing a building programme and developing a business plan, while home schooling two boys and walking a geriatric dog; just crazy really!

“And then the building itself. “It was like going from seeing a one- dimensional architect’s plan on a piece of paper or presenting it on screen for months on end, to suddenly being inside this incredible hi-tech, hi-definition four-dimensional, amazing venue almost overnight. “It was a fantastic feeling. “I absolutely love the look and feel of it, and feel so privileged to be working here.”

The opening programme Firestarters – which runs to June – will feature more than 40 artists across every genre and combinations of genres imaginable, and opened with Kathryn Tickell and The Darkening, and special guests The Lake Poets, in December. It was a memorable opening night, and day…

Tamsin says: “For those first few gigs I went for people I had a really good working relationship with. “I know Kathryn really well, and I know Marty from The Lake Poets and Royal Northern Sinfonia and Peter and David from Field Music, so I knew if anything went wrong they wouldn’t be too hard on us, and we could negotiate. “I felt very reassured, especially that first night with Kathryn. “She knew we were brand new, but because of the pandemic, her band hadn’t rehearsed for months, and she hadn’t had chance to rehearse with Marty, although they’d worked together before. “We got the keys at 11am and I gave them a room to rehearse in at noon, but almost immediately the alarm company needed to test the fire alarms, so they were going on and off the whole time they were in. “I went in and said, ‘I am so sorry’, and she was slightly grim faced and said, ‘no, it’s fine’, through gritted teeth. “I rang Barry Hyde at the Peacock and asked if he had a rehearsal room. He very kindly came to the rescue, and they got a couple of hours of rehearsal in.

“Somehow, I wasn’t stressed at all – it was really strange. “I was calm all week and had this feeling of calm the whole day from the moment they handed over the keys. I just rode through it. “I thrive on live events, but it was a bit weird. “We were all absolutely gagging for it. “We all work in events; it’d been two years and we were desperate to make things happen. “Our opening date had already moved several times, Omicron had started to take over and a lot of tours had been cancelled, but we held our nerve. “We were determined to open for the sake of all the artists who had worked so hard preparing, and the audiences who were so excited to attend.

“However, we knew audiences were taking a risk coming out, so we wanted them to feel safe and welcome. “We knew it would be the shot in the arm everyone needed; to have audiences in and artists on stage and people enjoying themselves, so we just went for it; we tested lots of genres in that first run of events to see how audiences reacted and what worked.

“It was a great ride.

“The highlight was walking out on stage on the first night and just saying, ‘welcome to The Fire Station.’ “That was like, ‘oh my God, we have finally opened the building’. “I did that every night for five nights and it got more real every time. “It was a glorious launch day, we moved a few things outside to make people feel safer, however, we had sell- out audiences and people in the building and it felt wonderful; I just thought, ‘this is what we do’. “It didn’t feel like an impossibility anymore.”

The Fire Station also played host to one of only three shows Emeli Sande performed in January – with the star bringing an unusual entourage. “Emeli brought all her family,” Tamsin says. “There were loads of kids running around backstage, her mum was here, all her extended family, it was fantastic.

“It was really special to have Emeli here.

“She’s a world-class artist who was born in Sunderland; it was so nice to see her, and it was a high-quality 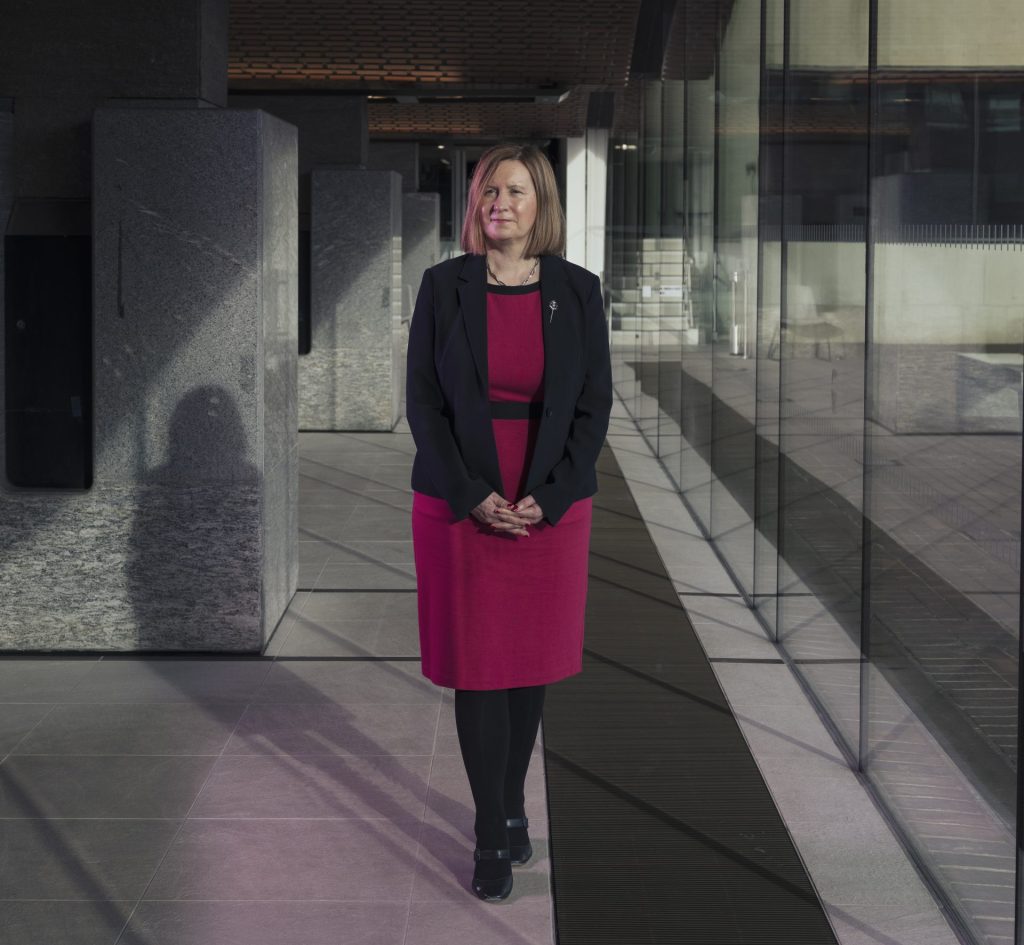