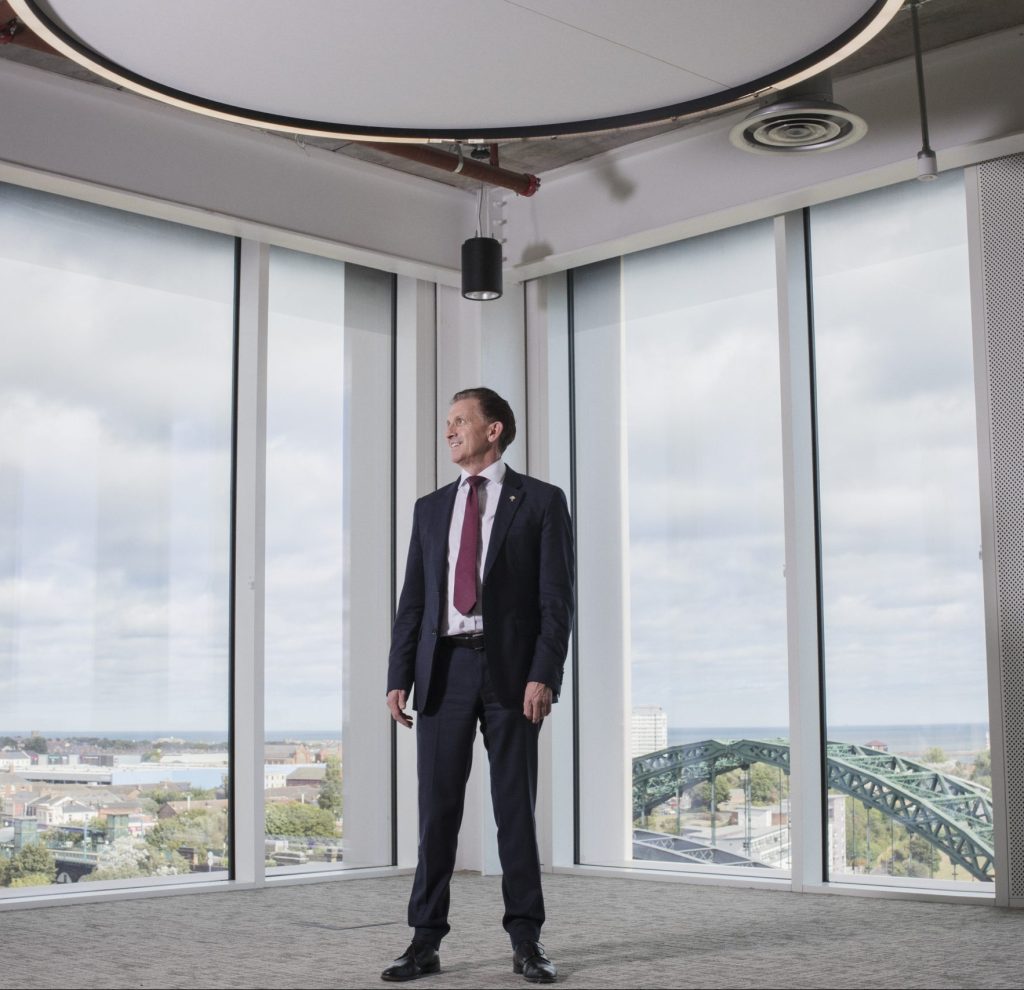 Tucked away among Nigel Wilson’s most treasured possessions is a picture that captures him, alongside his uncles and father, in one of their many competitive games of dominoes from yesteryear. Today, though, for the man who grew up in Darlington and County Durham, the black and white tiles are also symbolic of something else. For, as chief executive at financial services firm Legal & General, he is masterminding multi-million-pound investments across Newcastle and Sunderland that promise a huge domino effect of economic and employment growth. Here, Nigel speaks to Steven Hugill about those ventures and explains why they carry great personal importance.

“You can’t stay off the pitch and just keep clapping – you have to be out on the field playing.

“And the North East is playing now.”

For an avid Newcastle United supporter, Nigel Wilson’s choice of metaphor is particularly apt given the club’s recent change of ownership.

But the pertinence of his words goes much deeper than any reference to the Magpies’ fortunes, or indeed the din from sections of St James’ Park’s towering stands.

For, as chief executive at financial services group Legal & General, he is overseeing seismic commercial ventures in the region.

From Newcastle’s flagship £350 million Helix science and technology hub to the transformation of Sunderland’s former Vaux brewery site into a business focal point, and the rejuvenation of a Washington industrial park, Legal & General’s backing is as totemic as it is tangible.

At the Helix, where a coal mine once sustained a revolution in British industry, the base is today home to an industrial evolution, with highly-skilled workers at the vanguard of innovative change across healthcare and data-related advances.

Drawing together academia, business and the private and public sectors, the development is led by Legal & General alongside partners Newcastle City Council and Newcastle University and includes The Lumen and The Spark office buildings, which have risen from the ground thanks to substantial backing from the financial firm.

Staying in Newcastle, the UK’s largest investment manager for corporate pension schemes is also playing its part in improving support for the elderly.A previous £5 million outlay, described by Legal & General as a gift to the city,
is helping enhance care through two strands.

The first ties to the Future Homes Alliance project at the Helix, which aims to support real-world ageing and environmental sustainability by testing new innovations and products.

The second links to an endeavour around creating a care home of the future, which moves away from the traditional large-scale setting to a more domestic, clustered, communal offer.

On Wearside, where another ribbon of land previously provided employment for generations, Legal & General is helping bring new flavour to the Vaux site which once quenched drinkers’ collective thirsts the land over, in moves it says have the potential to create up to 3000 jobs.

Fuelled by a £100 million commitment, the investor is supporting the creation of City Hall – the eye-catching, multi-storey structure that will soon become local authority headquarters – as part of the wider Riverside Sunderland regeneration programme

Drawing together staff from several bases across the city, including Sunderland Civic Centre that will soon be demolished and replaced by housing, bosses say City Hall will provide a home for as many as 2000 workers while dramatically improving public access to council services.

Furthermore, Legal & General is working with developer Landid to deliver two supplementary office buildings, which between them will provide 200,000sq ft of space on the same postcode.

Elsewhere, the investor has pumped £60 million into plans to create around 1600 jobs at the 25-hectare Hillthorn Business Park, in nearby Washington. Developing around 620,000sq ft of space over nine new commercial buildings, officials say the endeavour will support the needs of industrial, storage and distribution businesses while augmenting growth at the neighbouring International Advanced Manufacturing Park.

Each are hugely significant for the region.

But, for Nigel – who sits on the Prime Minister’s Build Back Better Council – they carry added meaning too.

A former Darlingtonian, whose family once lived on Bates Avenue in the town’s Cockerton area (incidentally a short stroll from Whitby Way, where another captain of industry, former Nifco UK boss Mike Matthews, spent his formative years), Nigel remains in close touch with the place that helped mould his future.

A keen dominoes player, he recalls plenty of competitive games with his father and uncles, including a good few in the Travellers Rest pub, and he still returns to the watering hole when time allows during stop-offs with family ahead of match days at St James’ Park.

While his pub visits represent “a tradition of too many years that usually ends badly with Newcastle losing”, Nigel says Legal & General’s commitment to a fresh start for the North East promises to spur a chain reaction of watershed economic, employment and social change that will be less fives and threes and more hundreds and thousands.

“These projects mean a lot to me because they’re local to me,” he says.

“As a business, we’ve invested about £30 billion across the UK, but we wanted to prove that the North East is a great place to do so too.

“Someone had to kickstart all of this, at scale, with investment that looked brand new, modern and ambitious – and we’ve played a catalytic role in doing that,” adds Nigel, who still has family in the village of Heighington, nestled between Darlington and Bishop Auckland, as well as across the region.

To emphasise his point, he draws on the respective visions of Britishvolt and Nissan. Both – the latter in partnership with fellow Wearside green tech company Envision AESC – have planning permission to create huge electric battery making factories that are aimed at superch

Envision’s blueprint includes creating a production base at the International Advanced Manufacturing Park to annually produce up to 100,000 power packs.arging the UK’s transition to eco-friendlier motoring. Britishvolt says its venture, valued at £2.6 billion and set for a former coal yard at the old Blyth power station site, in Cambois, Northumberland, has the potential to create 3000 direct jobs and up to 5000 supply chain posts, adding it will have capacity to make as many as 300,000 batteries every year.

Part of a £1 billion partnership with Nissan that will help deliver the latter’s EV36Zero project – which is set to include production of a new all-electric model on Wearside – bosses say the plant will create 750 jobs and secure 300 further posts at Envision’s existing Sunderland base.

“It makes my job easier in promoting the North East if we are making measurable progress,” says Nigel, whose time in County Durham saw him attend Ferryhill Grammar School and live, for a period, in Newton Aycliffe.

“We have an expression here, ‘doors lead to doors’, and we’re very excited about the planned factories in Blyth and Sunderland, which are going to be a real part of helping get more high-paid, high- skilled jobs to the region.

“We want to keep the graduates up in the North – they can’t all be Dick Whittington going down to London looking for jobs.”

And Nigel says such knock-on effects are, in no small part, attributable to the ambitious and collaborative approach adopted by business leaders and local authorities, who, he says, recognise the added value projects such as the Helix and Riverside Sunderland can deliver.

He says: “People like (outgoing Newcastle City Council chief executive) Pat Ritchie, Tom Warburton (the authority’s director of city futures) and Patrick Melia (Sunderland City Council’s chief executive) have real leadership about these things; they get their sleeves rolled up and get stuck in to make good things happen.

“They care about place more than politics, which is very important.

“We try to do the right thing for the right reasons and deliver the right outcome – and we align ourselves with people who want to do the same thing; that is part of our success.” 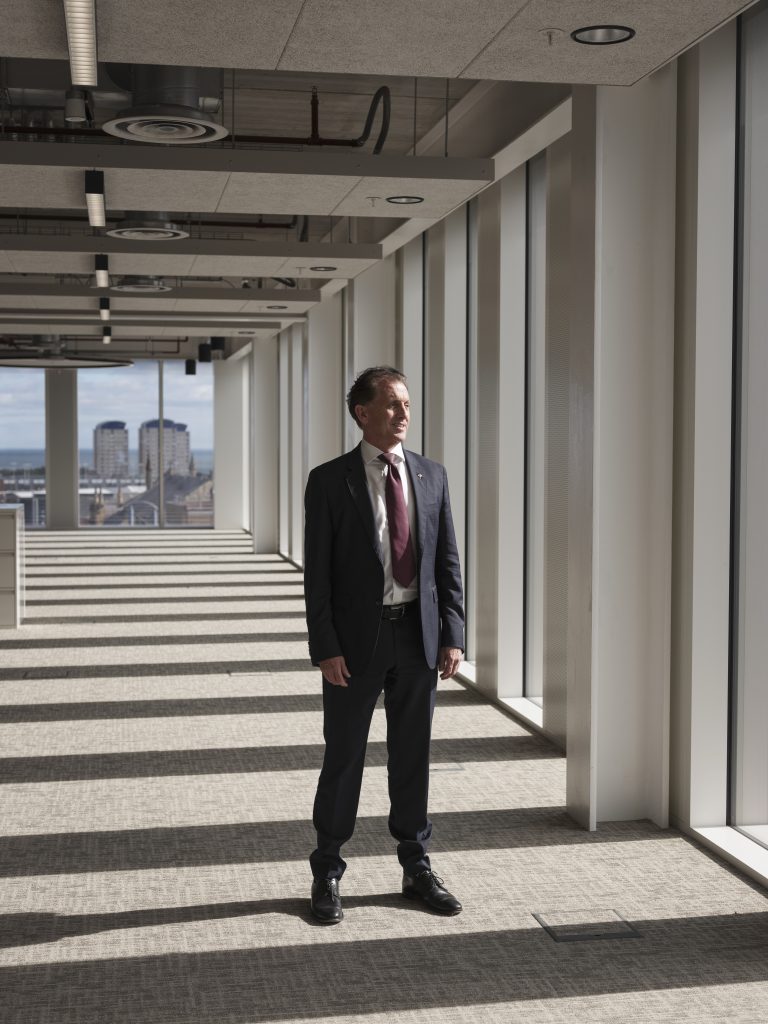 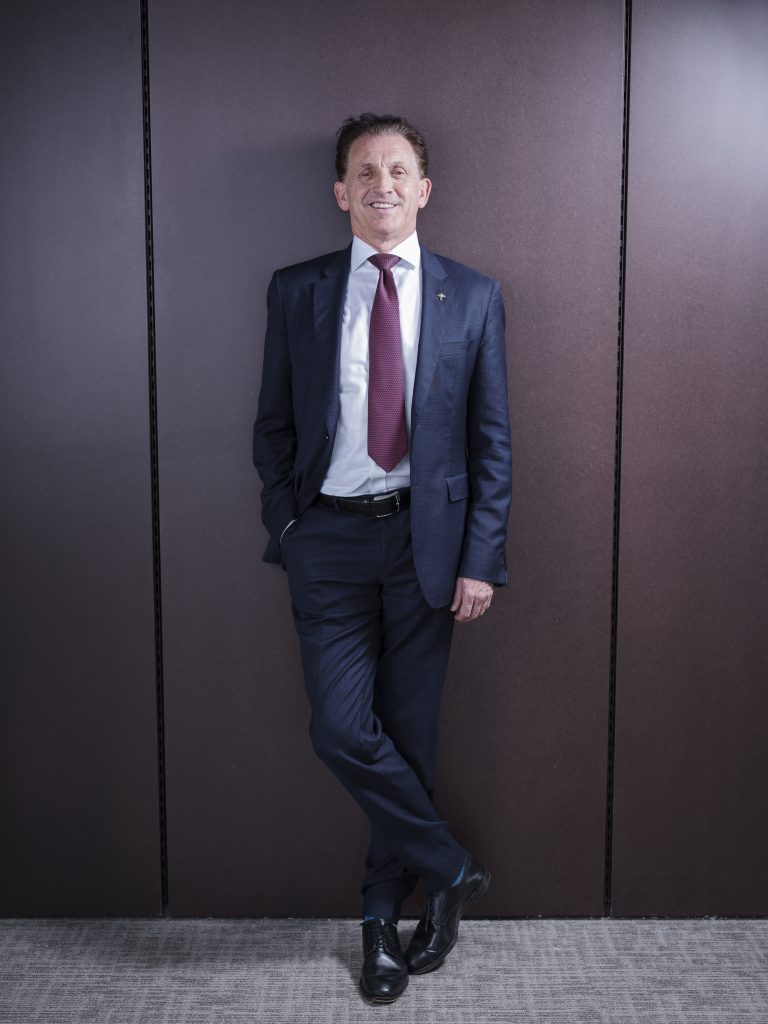 “For these things to work, you need great local partners that understand you well and are constructive too,” he adds. “It is the same with universities, and Newcastle identified quite early its role in the local economy and the place side of things as well.

“What we did with the Helix site is a really good example of putting pension money to work.

“Across the country, whether it is Leeds, Sheffield, the West Midlands or any other area, people now look at Newcastle and say, ‘you did that in partnership with those organisations, and we could do the same here’.

“Newcastle was almost a prototype for us.”

But, while the Helix and Riverside Sunderland represent successful alliances and the rebirth of tired city centre areas into hives of commercial activity, Nigel says further investment is still required to balance the North East economy with that of the wider UK.

His point is backed by Legal & General’s latest Rebuilding Britain Index study, which – revealed last month – shows
the region remains far behind the rest of the country when it comes to jobs and economic prosperity.

Ranking regions, cities and the UK out of 100 on a range of benchmarks, its findings showed the North East’s average score of 52 was below the national average of 60 and significantly lower than London’s 66.

Although Newcastle outscored the national average on GDP per capita (76 versus 60), the report says the North East lags behind the rest of the UK on the availability of highly-paid employment, with the region’s figures of 31 for average earnings and 38 for unemployment well behind countrywide averages of 49 and 54, respectively.

“There isn’t enough start-up capital in the North East right now when you compare it to other parts of the world,” says Nigel.

“That leads to higher paid and higher skilled jobs – and we need to get that up and running at scale.”

However, Nigel says he believes the foundations laid by Legal & General and its partners, as well as other work being carried out across the region, can be a catalyst for much positive change. He points to Tees Valley Mayor Ben Houchen and the transformation of ex-Redcar steelworks land into the Teesworks hub and associated attainment of freeport status as one example, alongside the Helix and Riverside Sunderland, of palpable progress.

He says: “From Teesside to Sunderland and Newcastle, there is good momentum. “There are lots of things going on, such as the new vehicle battery factories, and the Treasury coming to Darlington is very exciting too.

“I was at the recent Global Investment Summit, where Ben Houchen was on stage with West Midlands Mayor Andy Street and Greater Manchester Mayor

Andy Burnham, and it was great to see the North East represented in that way.

“Ben did a very professional job in promoting the region to the global investment community, and that is very important.

“The prospects should be good because we are beginning to put the North East on the radar of global investors.

“The leadership of the universitiesin the North East is very good and Newcastle can be a thought and intellectual leader in care economics and ageing.

“Furthermore, the developments around onshore and offshore wind and carbon capture and storage represent other big areas to work on.

“There are a number of exciting things happening in the North East.” 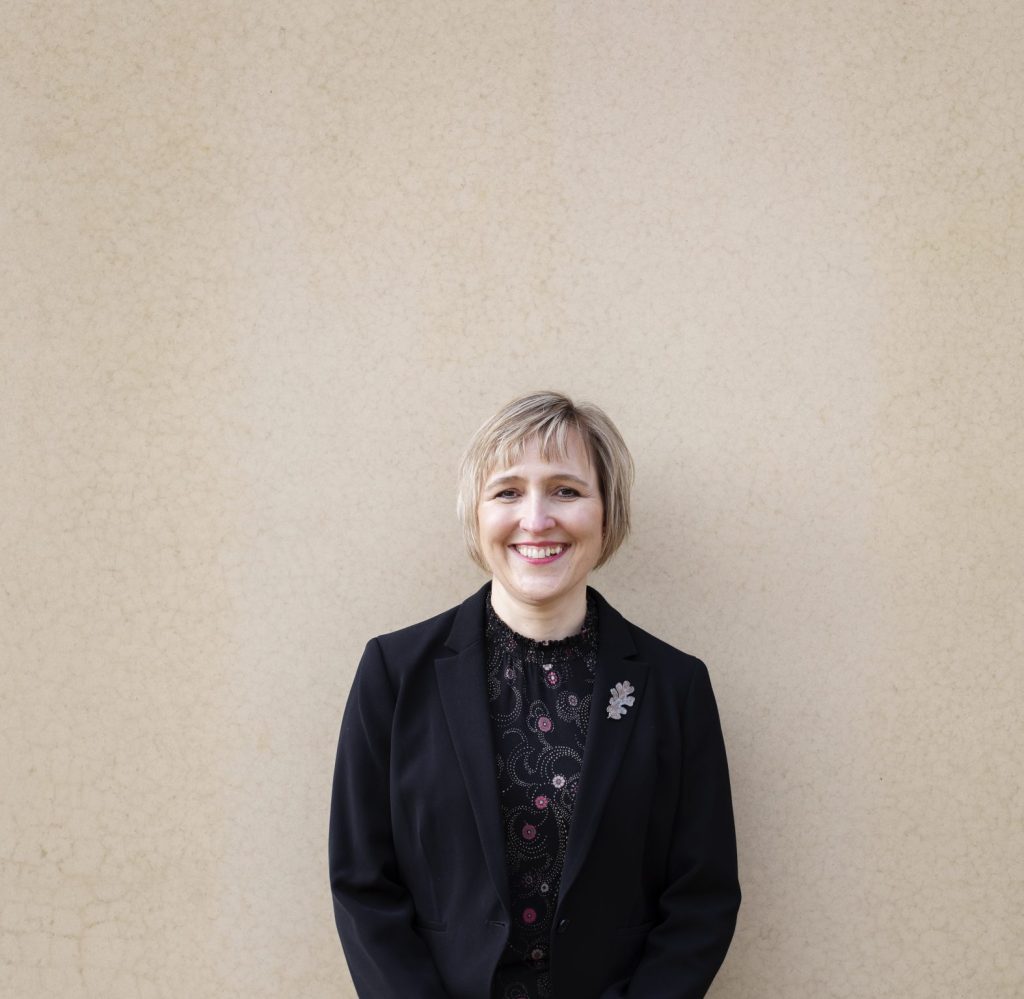