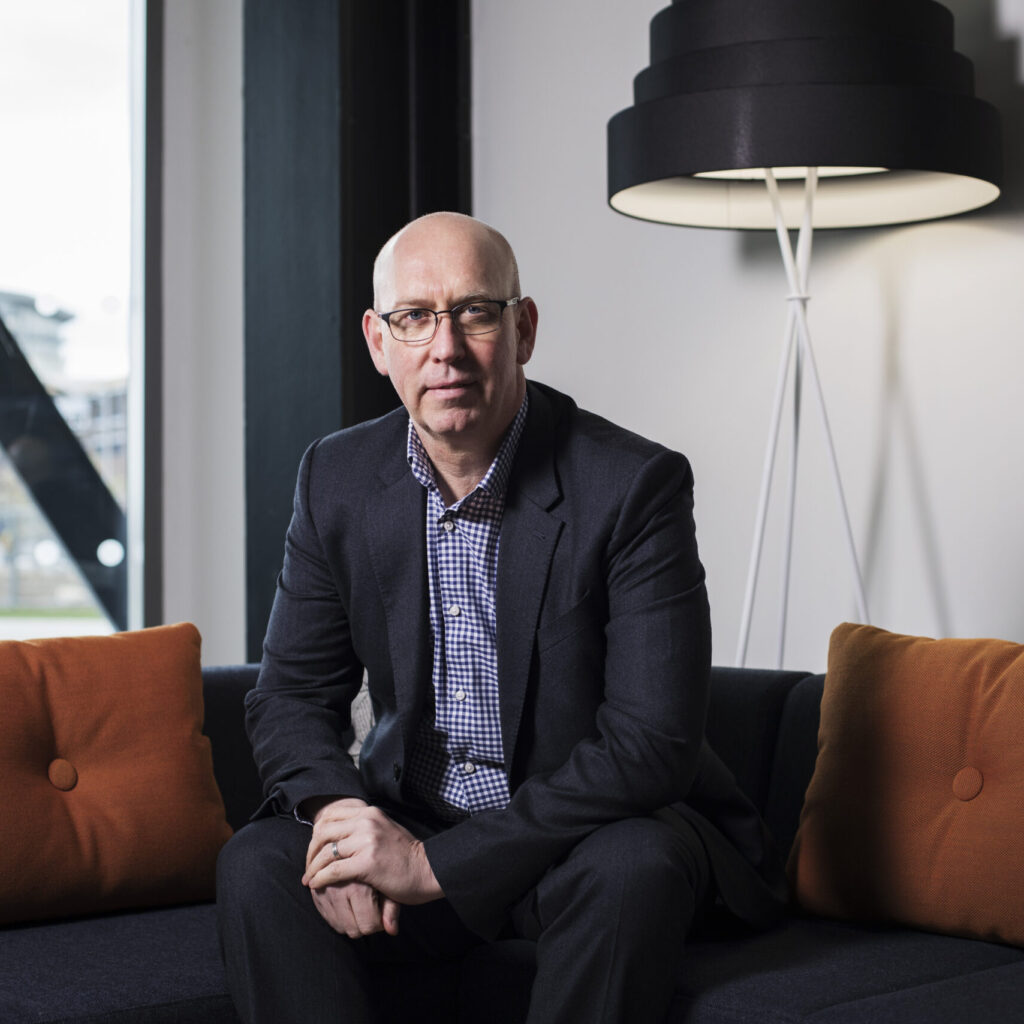 The beginning of a resurgence

As the global capital of shipbuilding, Sunderland once helped carry many a waterborne craft to destinations around the world. The River Wear may today run somewhat calmer, but the level of industry across the city remains no less significant, with the Riverside Sunderland regeneration programme transforming the area into a dynamic business and community hub. Steven Hugill speaks to Peter McIntyre, Sunderland City Council’s executive director of city development, to find out more.

To stand on Sunderland’s Northern Spire Bridge is to glimpse into both the past and present.

Glance one way along the River Wear and the marooned Cretehawser looms into view, a literal concrete reminder of the area’s manufacturing past.

Peer in the other direction towards the city, however, and just beyond the horizon sits not an industrial relic but a scene of economic and cultural reincarnation.

Wearside hasn’t always been home to successful masterplans – the hulking Cretehawser, a totem of short-lived shipbuilding innovation amid post-First World War shortages, is testament to that – but it is now.

Riverside Sunderland, spearheaded by the city’s council, promises to transform swathes of land that previously made the North East the UK’s shipbuilding capital into a dynamic business and community- focused hub.

Spanning 33.2 hectares of land that straddle the River Wear, and in places abut Sunderland AFC’s Stadium of Light, the blueprint promises to create a 10,000-job, one million sq ft business district, 1000 homes with sustainability at their core and the UK’s first carbon-neutral urban quarter.

That is just the start, however.

Having already converted the derelict former Vaux Brewery site into a commercial hub that includes flagship buildings such as The Beam – which counts national online grocer Ocado as a tenant – and a new City Hall, funded as part of a £100 million Legal & General investment, the masterplan has a number of further strands.

They include a £36 million, 90,000 sq ft eye hospital to replace the city’s existing 75-year-old infirmary, and two additional Legal & General-funded commercial buildings, a further 200,000sq ft of space, which will both occupy the footprint where Vaux’s Samson and Double Maxim beer lines once readily flowed.

Elsewhere, the pioneering Culture House will operate as an immersive library from Keel Square, with a 120-bed, four-star Holiday Inn just a stone’s throw away, and a 450-seat auditorium emerging from the Culture Quarter next to The Fire Station, on High Street West.

Factor in new open spaces, a pedestrian river crossing linking the Vaux site to the Stadium of Light and £25 million Government support to reinvigorate the retail landscape through the Future High Streets Fund and, says Peter McIntyre, Sunderland City Council’s executive director of city development, it all represents “the beginning of a resurgence”.

He says: “The masterplan is a series of promises to our communities, whether that is people living in Houghton, Washington or elsewhere in Sunderland, and its underlying message is that the city centre is theirs.

“There is more than £150 million worth of investment on-site now, and there will be £350 million by the end of the summer; it is going to be a very busy city centre.”

Intrinsic to that momentum, says Peter, will be the continued thrust provided by Ocado’s decision to leave the capital for the North East and asset manager and life assurance product provider Legal & General, which made a bold statement in 2019 when it backed Riverside Sunderland to the tune of £100 million.

He says: “My plan was always to develop an investable proposition that allowed the investment community to understand where Sunderland is and, crucially, what it wants.

“Ocado recognised it immediately. “They were heading to Newcastle, but we got them here and they saw Sunderland’s true wealth – its people.

“That, combined with The Beam, which provides a stunning location for the company’s foray out of London, meant it wasn’t a hard decision to come here.

“Furthermore, Legal & General had invested in other cities, but Sunderland was never really on their radar.

“However, our investment pitch enabled conversations up the chain to group chief executive Nigel Wilson, who genuinely does understand the North East having grown up in County Durham.”

And such has been the strength of its Wearside welcome that the firm has now submitted plans for an additional £60 million, 1600-job business development on Washington’s Hillthorn Park.

“Their investments are all about pensions and I’m sure they are providing those to thousands of people in Sunderland, so in that sense it closes the loop,” says Peter.

With Legal & General providing key financial support for the commercial aspect of Riverside Sunderland, another source of funding is helping deliver universal change to the city’s retail landscape.

Like many places, Sunderland’s shopping environment has been affected by the COVID-19 pandemic, with operators disappearing from the market entirely or closing outlets to salvage a future in an environment increasingly dominated by online spending.

However, with the Future High Streets Fund backing, Peter says Riverside Sunderland is ready to deliver watershed change and provide new spaces that are all about “experiences and families”.

He says: “There is a huge effort to regenerate the offer around the high street.

“We are bringing cohesion to the old and the new, and our plans will allow the retail core and areas around it, such as Sunniside, to take advantage of the investments we are making in Riverside Sunderland.

“The majority of the Bridges shopping centre, for example, is really successful. However, the southern end, which is the former Crowtree Leisure Centre, has almost been left standing in perfect isolation in its unfinished manner for a number of years.

“Crowtree is a big play for us; it is going to be the main leisure destination.

“It will be the place for people to start before experiencing things like The Auditorium or Culture House.

Peter continues: “The latter will be a £28 million modern interpretation of a library – which will be very unlike people’s normal perceptions – and have learning and digitally-enabled functions; it will be a really cool place for families.

“It is effectively modelled on being the city’s living room; if families with children want to go into the city, Culture House will be the launching point.”

It will, says Peter, also help to set Keel Square as a cultural and accommodation hotspot that feeds into Sunderland’s central business district.

He says: “The four-star Holiday Inn – which represents an £18 million development by Cairn Group – will have new bars and restaurants underneath it, and we then see the rest of High Street West to the north to be developed as offices.

“We have framed the cultural investments to create a whole new experience that runs from Crowtree to Mackie’s Corner, which will make the retail offer and Bridges shopping centre more successful because what city centres need going forward is a hybrid model.”

The fusion to which Peter refers is also being borne out in another facet of Riverside Sunderland – office accommodation.

As COVID-19 continues to alter the working landscape, with great numbers of people working remotely, the council has adapted its plans to meet such changes.

And Peter says the alterations will deliver significant benefits, both from a flexible working perspective and the city’s carbon-neutral objectives, with its new environments offering desirable backdrops in a post-pandemic era.

He says: “When we developed the masterplan prior to coronavirus, we were absolutely sure the brave decisions we were making were the correct ones.

“And COVID-19, with a little bit of Brexit and online shopping thrown in there too, has allowed us to accelerate those brave decisions.

“When we were designing the internals of City Hall for a team of around 1200, for example, we thought we were brave doing 700 desks for every 1000 employees.

“However, we are now looking at a two-to-one desk ratio, no desk allocation, 16 different typologies, lots of areas for joint working and collaboration and the best IT and audio and video to make it all happen.

“The city is not dead because of COVID-19 – cities have survived far worse things and will still be where all of the action is in the future.

Peter continues: “We are going to be very COVID-19 compliant.

“Old buildings on the edge of the city are going to need to be refreshed, and some may not be able to be adapt to the modern environment.

“A lot of businesses in these buildings will make the choice to move into new stock.”

And, says Peter, such an environmentally-friendly emphasis is extended to Riverside Sunderland’s 1000- home development, which will cover four communities along the River Wear and attract 2500 residents.

Created with sustainability at their heart, the homes, which will see an initial 132 erected, will act as a marker post for next generation living, to the extent that they will be showcased at the Sunderland Future Living Expo in 2023.

Peter says: “The houses will have the very best technology that will set the tone for how people will live in the city centre going forward.

“The expo is a model that the Scandinavians have been very good at for a long time.

“The most successful framework is Finland’s Housing Fair, and we are adopting that model in Sunderland.

He continues: “It’s a three-year play – we are working with lots of universities, and TV architect and Ministry of Building Innovation and Education founder George Clarke is a champion of it too.

“Over the next three years, we will have annual themes going through – advanced, green and smart – and in August 2023 the development will be opened up for visitors from around Europe.

“We will demonstrate how you can live sustainably in a post-industrial city such as Sunderland.

“Furthermore, we are now talking to the Government about attracting the winner of the Home of 2030 competition – which was held recently to look at new housing designs – to Sunderland.”

And, after years of blueprints, Peter says he cannot wait to see the housing revolution, alongside the entire Riverside Sunderland project, realised in all its glory.

He adds: “As a pitman’s son, it is really good to see pit communities getting their just desserts, which is high-level investment and jobs for their children.” 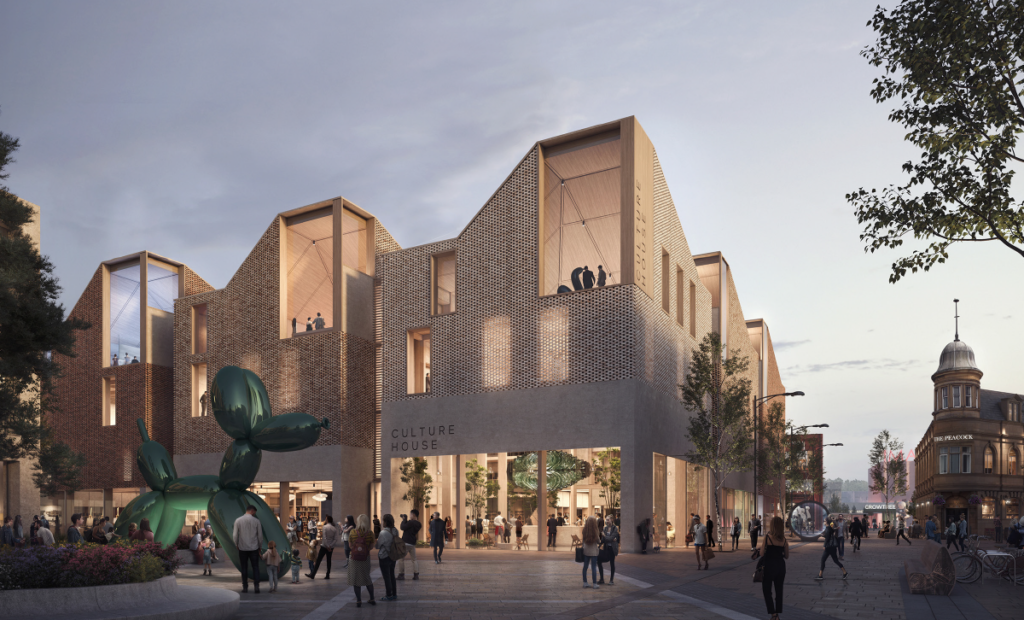 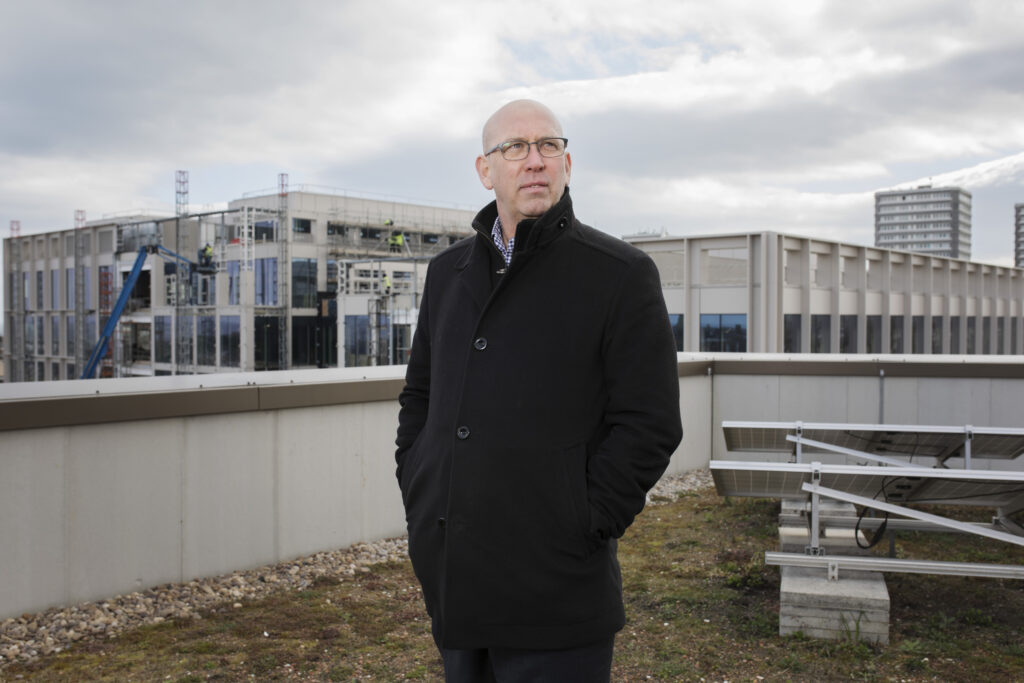 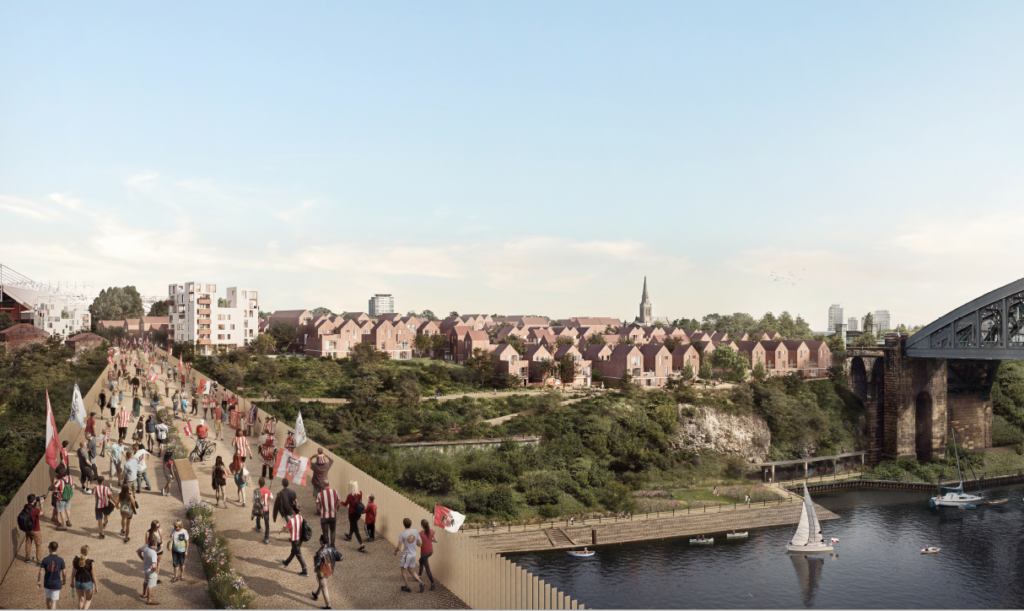 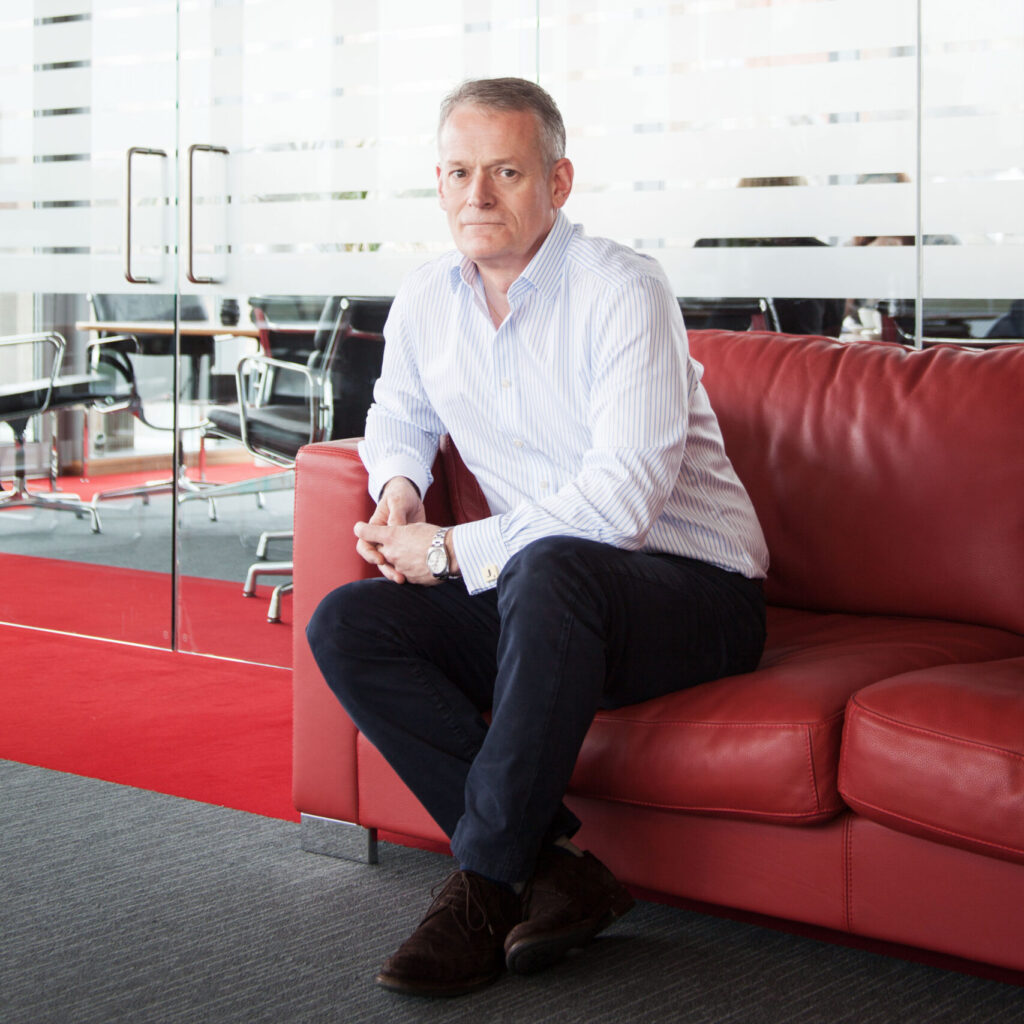 Life a year on from the first COVID-19 lockdown