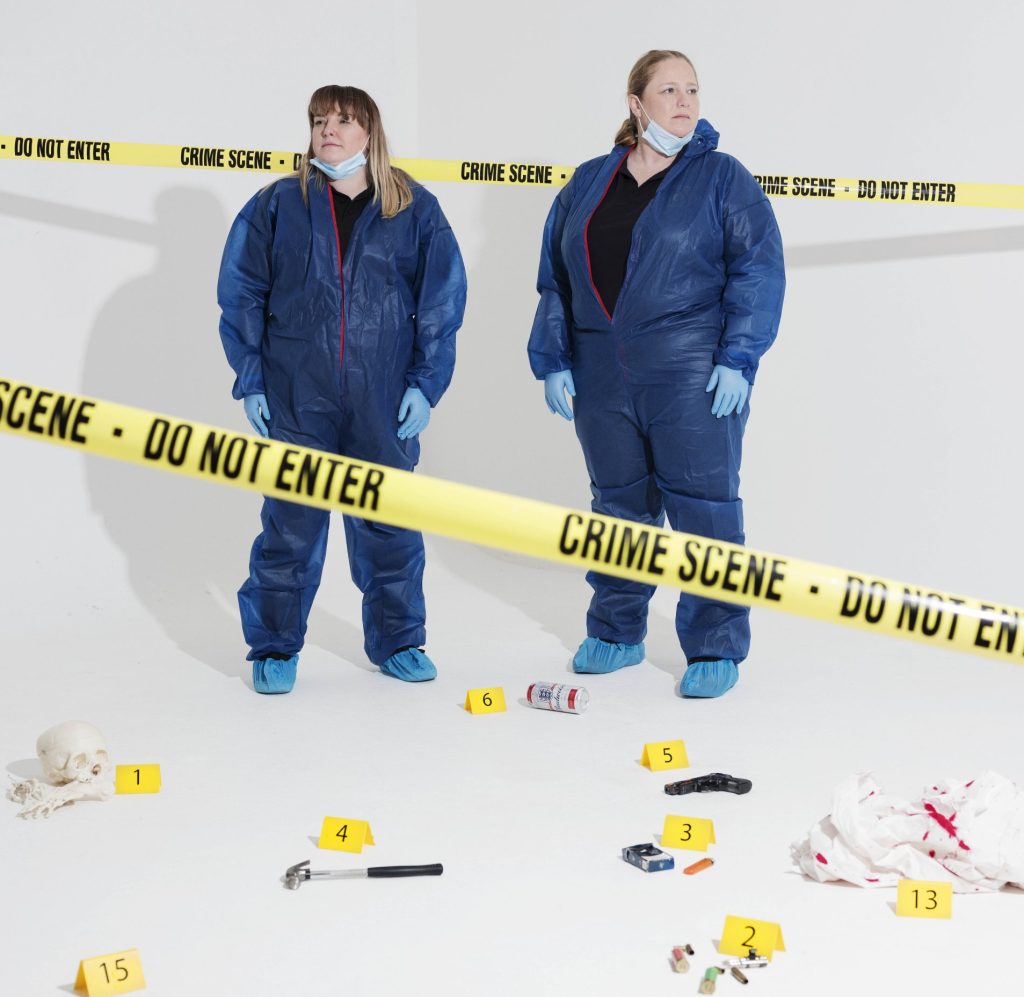 The scene of the crime

As increasing numbers of workers return to their offices, so too do team building and bonding exercises. Many of these services closed due to the pandemic or were forced to go online, and a good number of businesses have since too gotten out of the habit of providing such fun days aimed at improving office unity. The easing of restrictions, though, has allowed the likes of CSI Training and Events Ltd to go back on the road and sprinkle their ‘magic fingerprint
dust’. Colin Young meets two former crime scene investigation officers with a grisly tale or two to tell.

They never really needed them as crime scene investigators (CSIs) with Northumbria Police; colleagues and prosecutors relied instead on the forensic evidence it was their job to collate, present and protect.

But these two vastly experienced and highly trained CSIs have a confession of their own to make after nearly ten years in business together.

The two friends and business partners are providing their unique and very important team-bonding courses as thousands begin to return to the office and come to terms with seeing and working face-to-face with colleagues again.

But they admit they have made the decision to move out of their base at The Victoria Building, within Teesside University’s Middlesbrough campus, and run their expanding business from their homes; Angela in Redcar, and Dionne in Hebburn.

Like many, they have adapted to working from home and recognised that CSI can function and flourish without the need of a dedicated office, and that they can still meet up, virtually or in person, before and after they go out on the road.

“The incubation unit we used was fantastic, but they started to repurpose the ground floor,” explains Angela.

“We had already temporarily moved to home working, prior to the first lockdown, and it has been working well for us, so we will continue in the short-term.

“Yes, we are working from home, but we can organise events remotely together, we can work at each other’s houses, do our own stuff, deliver events together and have a lot of fun doing it.

“There are aspects of having an office we miss – but we don’t miss the commute and that has saved significant time, particularly for Dee.

During the pandemic, it was really strange for Dee and I to spend so much time apart.

“We still spoke to each other on Zoom, of course, but it isn’t the same, so it has been great to get back to our friendship and being on the road, because we always have a laugh.”

The irony of now working from home, while helping people come to terms with doing the opposite, is not lost on the pair.

But they are providing an important service as office workers across the nation make, what will be for many, the difficult step back into the once normal and taken for granted daily working environment.

Many will have met, or have still to meet for the first time, as the number of companies opening their doors steadily increases – while the COVID-19 infection rate shows no sign of abating and may eventually force another change in Government policy on mask-wearing and social interactions.

Angela says: “Working from home meant a significant shift for people and some of the skills may have been left behind 18 months ago.

“It is about reintegrating and re- bonding, which is the idea behind our events; to bring people together and rediscover those key skills for the workplace.

“We delivered a number of events over the summer, and you can sense the relief for people gaining that freedom and liberation and engagement with other people who are so happy to be back to some sort of normality.

“At first it was a little overwhelming, dealing with large groups again, and of course we were conscious of COVID-19, but that’s the beauty of our events – we bring full PPE, making them safe for everyone. 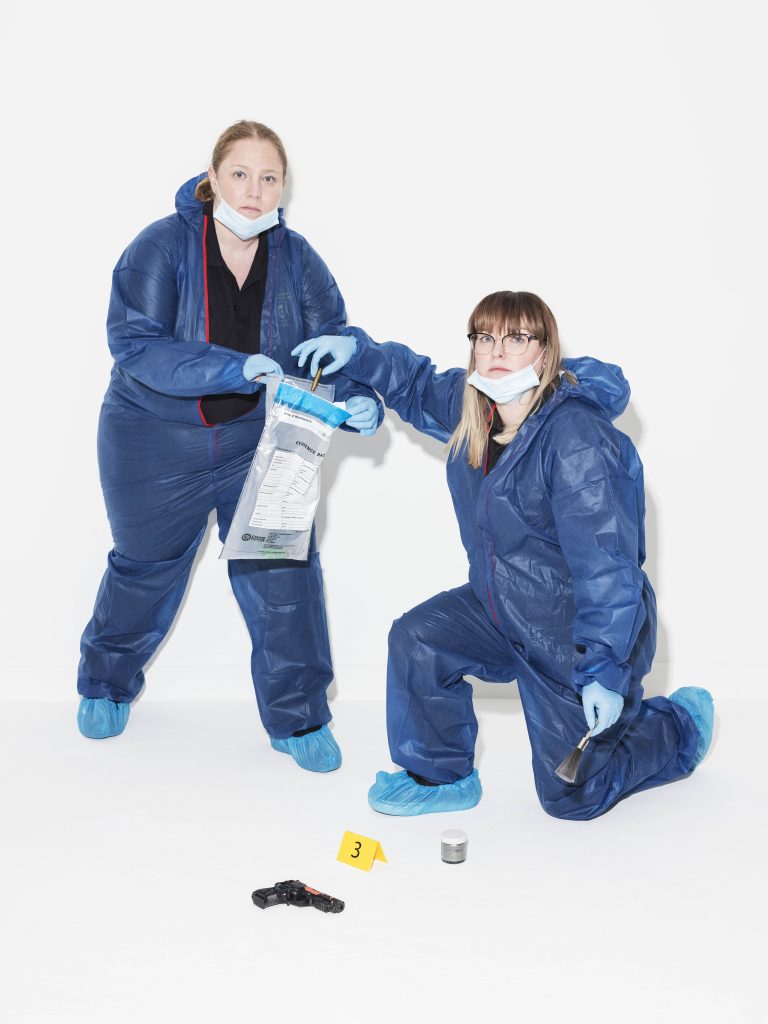 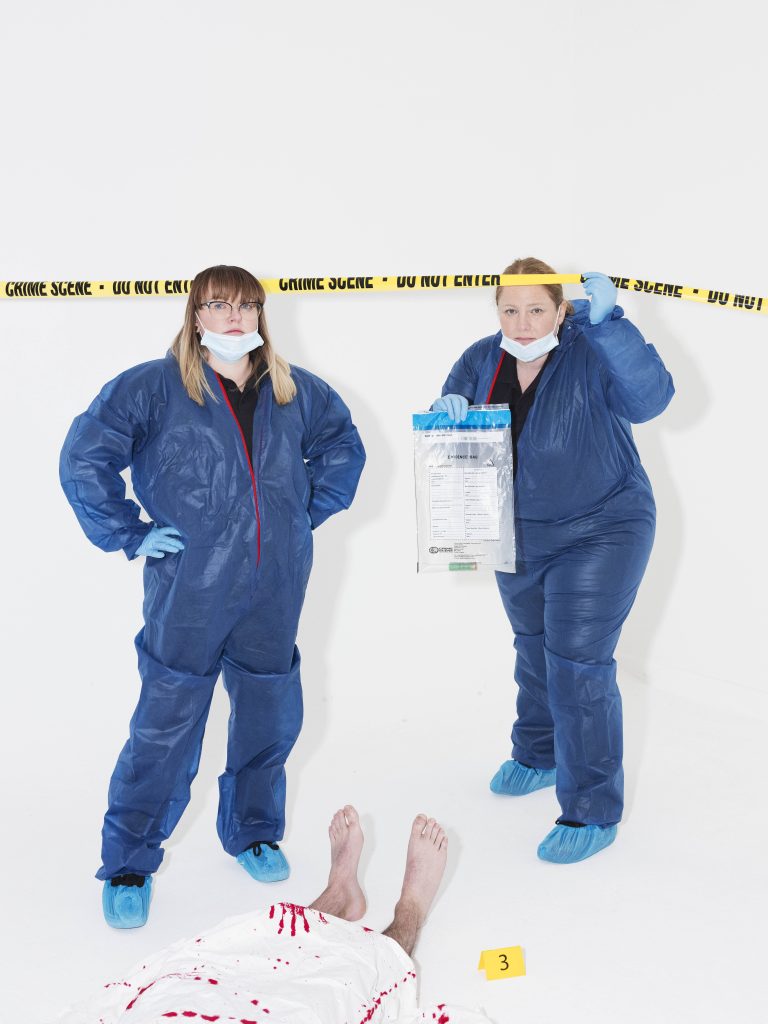 “It was also very liberating to be back on the road, travelling together and helping people.

“It is not easy for people; it is a culture shock going back to the office, commuting again, which adds to your day, getting back into structured working hours. The importance of team is there, no matter what.”

Angela and Dionne met and became friends as students at Teesside University, both graduating in 2008 and joining Northumbria Police.

They eventually worked together in Sunderland where Dionne spent the majority of her service, while Angela had been based in Northumberland and Gateshead beforehand.

Four years into their careers, the police force was hit by cutbacks and the two women took the leap to set up their own business, initially focusing on courses for children, with the aim of encouraging them to go into STEM subjects and careers.

“We both loved the crime scene investigation work; the actual job itself, practical aspects, going to the scene, recovering evidence, interacting with victims, knowing you are helping them in some way, it’s brilliant.

“It is a really good job, and it is so varied.

“You never know what you are going to be doing, not just from day-to-day, but it can change within a couple of hours.

“However, the redundancies changed the landscape of the job, so we moved on.”

Their start-up was backed by Teesside University and advisers were on hand to help with business plans, portfolios and support on how to expand and develop their business and create websites, logos and workshops.

Concerned the business was concentrating on schools when the national education budget was also being cut, they expanded into corporate events, training and consultancy work.

As well as their tailored events, the duo have two very popular off-the-shelf team-building events they provide for businesses – Cluedunnit, their take on a popular board game, and their murder mystery game Whodunnit.

These full-day or half-day sessions, for teams of six up to 100-plus, start with participants dressing up in full CSI outfits including suits, face masks, overshoes and gloves, and Dionne admits this part of the day is the perfect scene-setter to set the tone and open participants’ eyes to the world of crime scene investigation.

“Kids and adults love the dressing-up part,” she says.

“It always gets them excited, and it doesn’t matter how old they are. It always creates a nice atmosphere, the minute you get the suits out, and sometimes we will give this a competitive edge by timing teams.”

The new ‘recruits’ then take each other’s fingerprints – “a nice icebreaker because quite often people haven’t met and it gets them talking,” says Dionne.

“There is a real skill to it,” she adds.
“So, we quite often add a competitive edge to that as well. “Also, when we teach them CSI skills, and get the different brushes out, it’s like magic,” adds Angela.

“Adults love that just as much as the kids.” Before and after the groups are let loose on their investigations, which include ‘a dead body’ (mannequin or skeleton depending on event) and various clues and pieces of forensic evidence, the pair conduct a question and answer session.

And with years of experience covering murders, suicides, air crash investigations and thousands of burglaries, they have plenty of anecdotes and grisly, fascinating stories.

The sights, scenes and smells they describe when we meet just outside Middlesbrough for coffee leave plenty to the imagination. And the younger the audience, the braver the query – although the pair are always sensitive to people who may have been victims of crime.

Dionne says: “One of the differences between us and our competitors is we have actually experienced crime scenes and disaster work, and people are genuinely surprised we have done that in real life.

“We get a million-and-one questions.

“When we do the courses in schools, some of the younger ones are not afraid to ask questions.”

“We have to look at the teacher and say, ‘can we answer this one?’”

“That’s always a popular one. Some people love that… gore, others just don’t, so you must read the room and there’s always a health warning.

“When we started, we were conscious that we were trying to keep things too realistic to the job, but our aim is not to turn everyone into a CSI, it’s about have a true to life experience, while having fun.

“There has to be some artistic licence and we recognise it has to fit within a business world, so our events have been adapted to ensure delegates get a fun experience while utilising and developing the skills an investigator needs to crack a case, which can then be applied back at the office”

The pandemic forced Angela and Dionne to add to their portfolio and during lockdown they launched their new digital company, Crime Scene Assist, and their first digital product, Crime Scene Assistant, a forensic awareness app for frontline responders.

The app is starting to take off and gather traction, selling internationally in Europe, the United States, Canada, Thailand and the Philippines.

It is also popular with universities – the business currently licences to seven in the UK and Ireland.

Dionne says: “The app is for frontline responders, police paramedics, fire officers, security officers, social workers, bouncers – anyone with the potential to be in contact with a crime scene in their profession and who often don’t get training and preparation.

“The app is there to fill that gap.” Being on the road and delivering in person is CSI Training and Events’ bread and butter, and the blood pumping through it – or left lying at the scene of the crime. Angela says: “Things have been tough but there’s a real determination to keep going. “We started in a recession when cuts were being made to public funding, but we managed to set up and keep going in that period and that’s pretty amazing.”

“And, we have a good laugh,” adds Dionne.

“You need a pretty dark sense of humour in this business…” 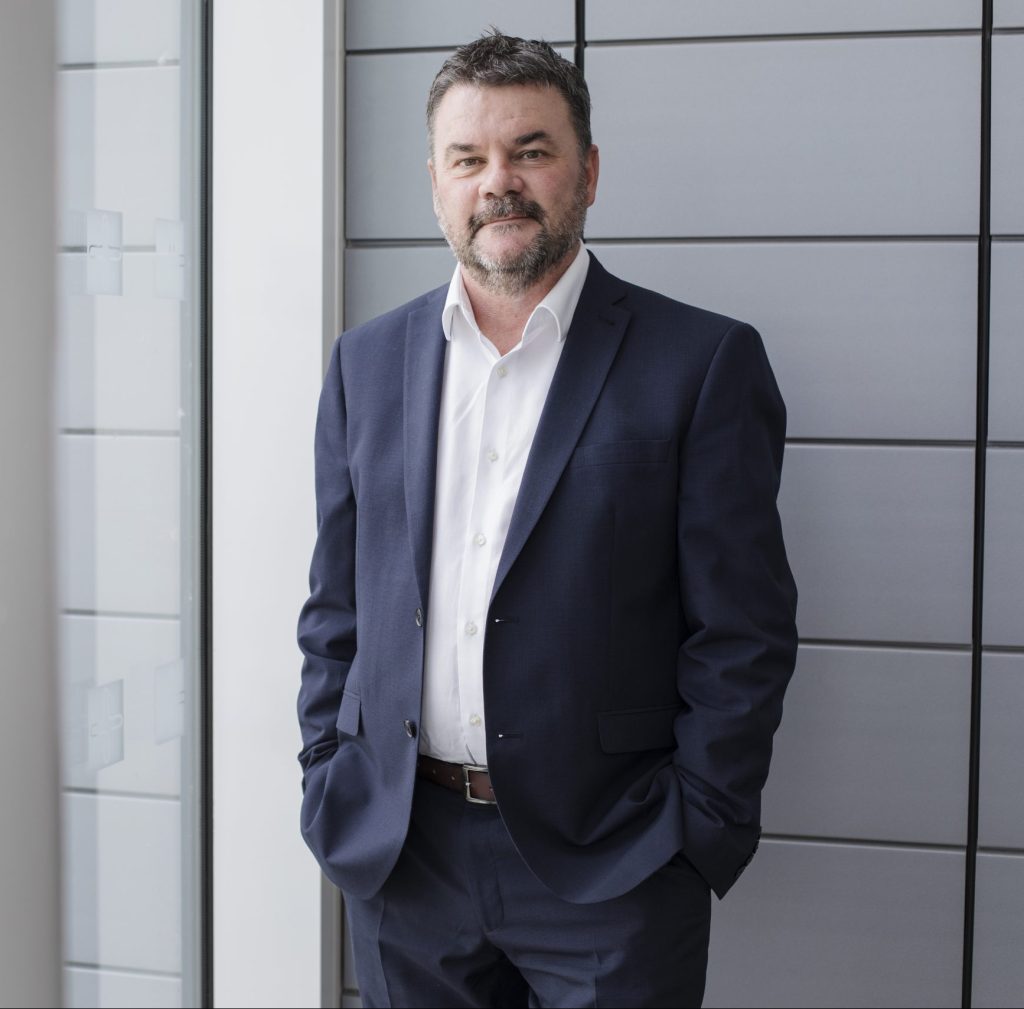 Finding the right executive talent in a changing world