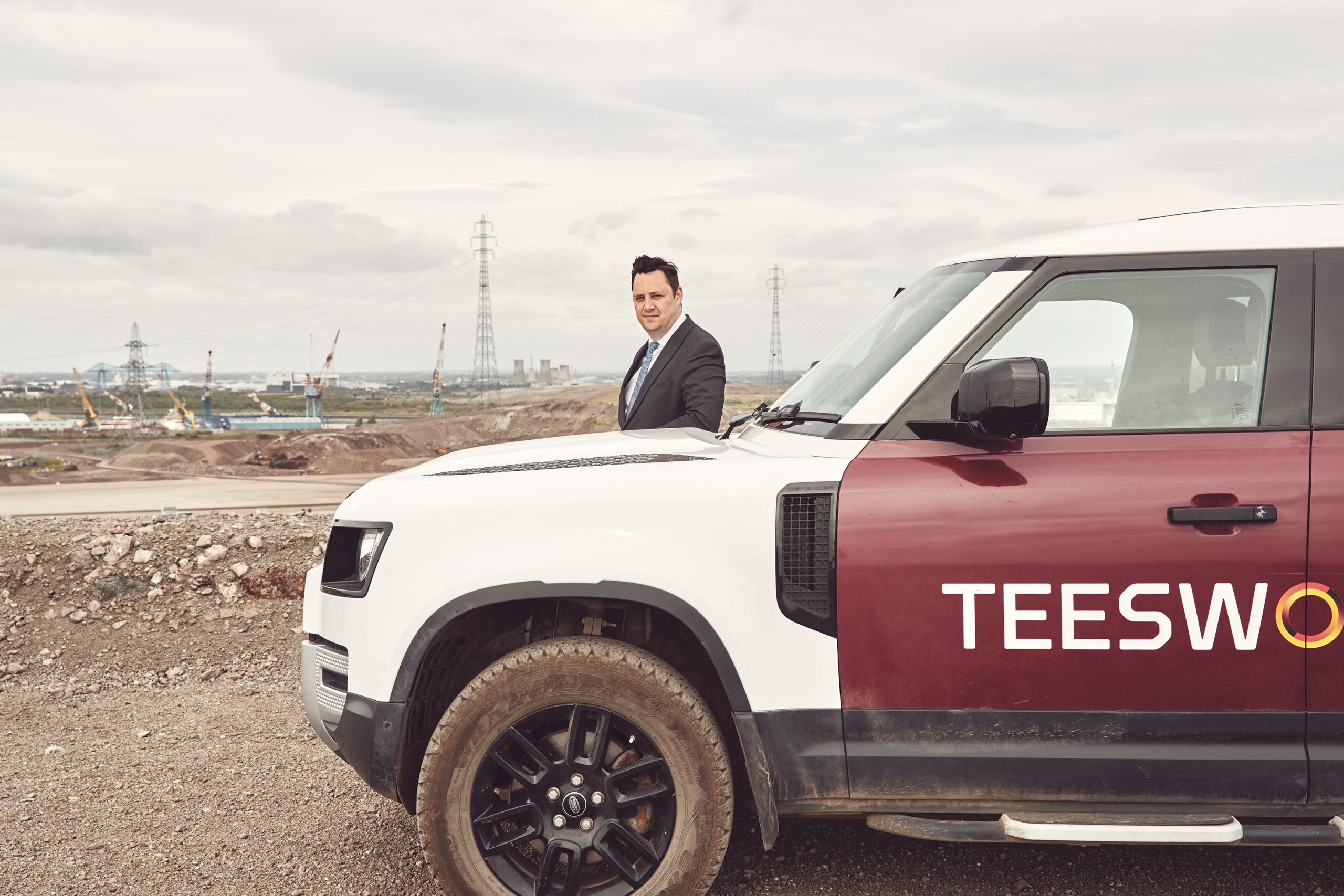 A flagbearer for change

Where the fires of Teesside iron and steelmaking once burned brightly, work is today underway to blaze a new trail. Excavators and explosives are razing iconic structures – including Redcar’s revered blast furnace – to make way for the Teesworks clean energy hub. Here, Steven Hugill speaks to Tees Valley Mayor Ben Houchen to learn more about the transformation, the importance of retaining centuries of manufacturing heritage and why the area is ready to lead the way globally again.

A white Land Rover Defender accelerates up a concrete slipway, stopping sharply on its shallow crest.

A patchwork of metal fills the windscreen, criss-crossing beams exposed through the remains of decaying grey and brown sheeting, old industrial bones creaking and groaning as a breeze whistles through the structure’s peeling, rusting skin.

Beyond its bare ribcage, the belly of the beast, from where the fires of industry once roared, is silent, all life permanently extinguished.

The Redcar blast furnace, a fixture across the town’s skyline for decades, and shorthand for the glory days of Teesside iron and steelmaking, will soon be no more.

It’s the same story at nearby coke ovens.

Battered by explosives, buildings sag helplessly forward like a former champion athlete who, knowing the race is run, awaits the next generation to pick up the baton.

And that transition, to continue the metaphor, is well on track, with the vast steelworks expanse, latterly occupied by SSI UK, being transformed into the Teesworks clean energy hub.

Elsewhere, Circular Fuels will convert non-recyclable household and industrial waste into clean burning fuel, and the Net Zero Teesside Power project, spearheaded by BP, is moving ever closer to delivering a gas-fired power station with next generation carbon capture and storage capabilities.

And, says Tees Valley Mayor Ben Houchen, the man at the wheel of the change – and who navigated the Defender across the works’ bumpy terrain to provide North East Times with an exclusive tour – there is much more to come.

He says: “We’re at a really interesting phase at the moment.

“There is a lot of demolition going on; the whole steelworks will be down by October and we’re complementing that with construction, which marks a big step forward.

“The buildings we’re pulling down have huge and significant historical connotations – there has been an iron and steel industry in this area for more than a century.

“So to have things now rising from the ground is really positive.

“It gives people confidence that the journey and strategy is becoming real – they can see it, touch it, smell it.”

And that tangibility, he says, is being matched by interest in the sprawling expanse, with previously-announced deals supplemented by a perpetual stream of international parties eyeing their own small piece of Teesside.

He says: “We recently welcomed a 60-strong Saudi Arabian delegation, and the Singaporean government, and a number of investors, were here not too long ago as well.

“We’ve almost got a semi-dedicated team managing these visits, such is the volume of interest.

“Some of it doesn’t lead to anything,

and what is going on.

“And there is a lot going on.

“Nobody can compete with us on the hard metrics – with our availability of land and energy, our proximity to a deep river, and our skills and wages – we blow everyone else out the water.

“We’ve got half a dozen investors that we’ve agreed terms with, and I firmly believe that once SeAH’s spades get deeper into the ground, a lot more dominoes will start falling over.

“Over the next six to 12 months, I’d expect at least two or three other major construction projects to start.”

A chief catalyst in catapulting Teesworks’ into the consciousness of global investors is its Government-backed freeport status.

And Mayor Houchen says it is already having a considerable impact. He says: “Freeport status has really accelerated our momentum.

“Yes, things like the tax benefits are attractive, especially for large manufacturers, but it’s also the Government buy-in.

“All the investors we speak to are international, and being a freeport is a big win.

“Investors see it as a seal of approval, a symbol of something they want to be connected with.

“As soon as Rishi announced our freeport status, the enquiries went through the roof.”

And such is the pace of progress, reveals Mayor Houchen, that his growth expectations – and those of the South Tees Development Corporation, which was founded in the summer of 2017 – are being dramatically rewritten.

“And, if a couple of the investors we are speaking to come to fruition, it’s probably a five to eight-year plan.

The pace hasn’t always been so strong, though, and neither has the journey been without its challenges.

Following his election as Tees Valley’s new regeneration boss in 2017, when Mayor Houchen’s first wellington-booted steps pressed down on the derelict expanse, what he saw was a base shrouded beneath a mourning veil.

For many, the site was Teesside epitomised; it was pride, passion, an imprint on the world.

It was generations of families, who, from one to the next, ceremonially passed the work ethic, the donkey jackets and the hard hats down the tree to the latest in line.

But despite the fervent campaigns to save Teesside steelmaking, and the anger and rage at perceived Government inaction (which still burns in many to this day), the blast furnace flame flickered and died.

And for Mayor Houchen, the emotional outpouring was compounded by a tussle with three banks in SSI UK’s home country of Thailand.

An 870-acre parcel of land – key to any redevelopment – rested in their hands, and, given the steelmaker’s demise, the finance houses were more than a little reluctant to part easily with their estate. A lengthy battle ensued, with Mayor Houchen eventually gaining access to the expanse through a compulsory purchase order in 2020.

And while the time taken to negotiate the plot was lengthy, and no less vexing, he says it provided an inadvertent release valve that allowed people to properly mourn the works’ passing, while having time to accept its future.

He says: “Because I was first elected in 2017, I didn’t come with the baggage of the closure, and you could say, in hindsight, that the battle with the banks provided some space to create a new story and take the community along.

“It was a huge economic and personal shock.

“Teesside, by and large, and certainly Middlesbrough, only exists because of the iron and steelworks.

“Middlesbrough was once a hamlet of a dozen or so dwellings – the main place in Teesside going right back to the Doomsday Book was Yarm, which operated as a market trading post on the river.

“Without iron and steel, we wouldn’t be here today, and neither would I – my family worked in agriculture in East Anglia before moving to Teesside in 1810 because of the Industrial Revolution.

“So what the time taken to complete the compulsory purchase order allowed me to do was speak to people, listen to their frustrations and look back with them, while also looking forward.

“And after months and months of explaining the strategy, and being able to demonstrate small wins along the way, we’re now at a point where the large part of the community are saying they’re excited.

“I think we needed that period of mourning; the fact the site didn’t move straight into a new phase was quite cathartic for the community.”

A central strand to the Teesworks blueprint back then was to maintain the area’s cherished status as an international pioneer, channelling the spirit of its iron and steel heydays to fashion a fresh – and sustainably focused – epoch on the world stage.

And with SeAH Wind’s factory emerging from the ground, and other areas of the industrial hub undergoing remediation to deliver additional plants, those ambitions, says Mayor Houchen, are crystallising.

“And then there’s the fantastic story of cabinet war rooms next to the Treasury being stamped with the name of (former Teesside iron and steel firm) Dorman Long.

“It’s amazing to think Churchill’s wargaming and events like Dunkirk and D-Day were planned under the protection of Teesside steel.”

“All of that makes what we’re doing with Teesworks so poetic,” says Mayor Houchen, who reveals SeAH Wind is working with the Blyth-based ORE Catapult to advance innovations.

He says: “We’re using the same skills and some of the same technology, but in a way that isn’t just leading in the UK, but standing at the forefront internationally, especially around things like hydrogen and carbon capture and storage.

“There is a real poeticism in the carbon capture and storage facility, because the carbon is going to be buried in depleted oil caverns that were polluting the world for decades.

“The world, literally, is looking at us and saying, ‘let’s see how this goes’, because this could completely change how we produce energy and decarbonise things like gas.

“We previously had what is in effect the British ambassador for Texas visit the site.

“He said all the big oil and gas companies, which are headquartered in Houston, are talking about Teesside and looking at the carbon capture and storage plant as a test bed to define what they will look like going forward.

“If we succeed, it will allow gas to be used in the long-term, but in a decarbonised way, and they see that as protecting their respective businesses while matching the net-zero agenda.”

He adds: “There is nothing happening on this scale elsewhere.

“We are the flagbearer for change.”