Officials say the trio add expertise and experience to NOF’s strategy around transitioning the region’s supply chain to a low carbon economy.

Patrick works at PX Group, which manages, operates and maintains some of the UK’s largest industrial facilities, and owns the Saltend Chemicals Park at the UK’s ‘Energy Estuary’ in Hull.

Stephen is vice-president and general manager of Haskel, which is known for making high-pressure pumps and compressors, and process equipment such as hydrogen refuelling stations.

He began his career as a research and development scientist with Procter & Gamble, later moving to Krauss Maffei UK, before starting his own business development consultancy. 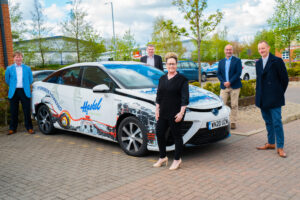 Tom is North East stakeholder manager at Equinor and recently joined its renewables division, which is working on Dogger Bank, the world’s largest offshore wind farm.

He previously held various marketing, communication and business development roles in the energy supply chain, supporting the growth of businesses including JDR.

George Rafferty, NOF chief executive, said: “The NOF board has always been instrumental in advising on the evolution of the energy industry and our evolving business model, providing invaluable insights to shape the support we provide to members.

“Tom, Stephen and Patrick all come from diverse, but essential, parts of the energy industry that are key to achieving a low carbon future.

“With the Government’s ambitions to create a net-zero economy, NOF is committed to helping our members and industry contribute to the energy transition agenda, which will in turn enable them to develop sustainable business opportunities for their companies.”