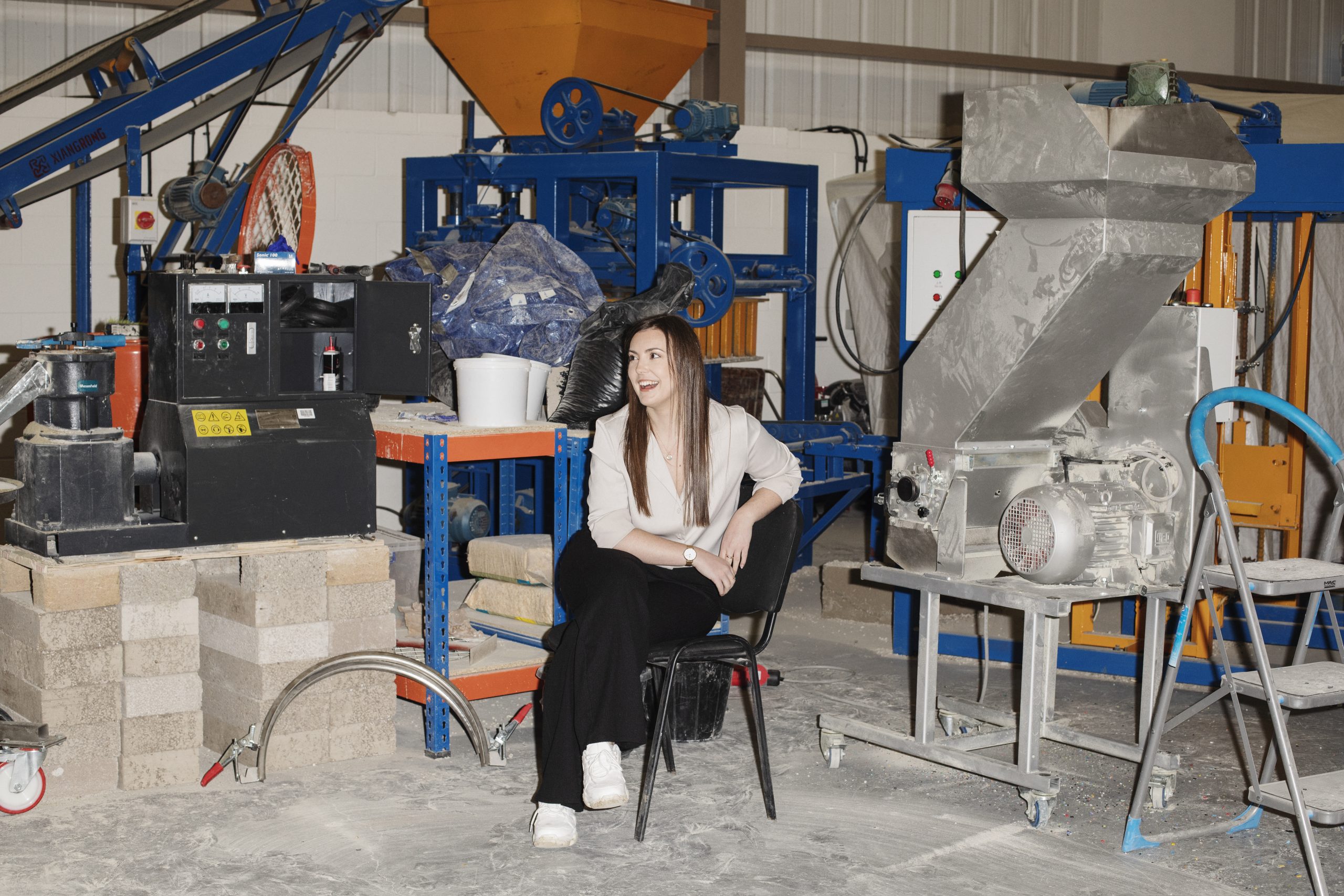 Natasha Boulding and her two friends Scott Bush and Phil Buckley are having the time of their lives making building blocks in a little trading estate unit in County Durham. Within five years, they have gone from experimenting with waste materials in their Durham University laboratories and kitchens, to developing technology capable of transforming waste plastic and other by-products – otherwise confined to landfill or incineration – into a carbon-negative aggregate for concrete. No wonder the construction industry is already taking notice of their start-up business Sphera. The trio are on the verge of upgrading their headquarters, expanding development, testing and staff, as they make environmentally-friendly concrete that will literally change our landscape forever. Before the big move, Colin Young met the entrepreneur who is helping transform the way we build.

We’re 12 minutes in to the interview and I know Natasha Boulding and I are going get along just fine.

The 28-year-old (she thinks) is explaining why she, and fellow Durham University PhD colleagues Scott and Phil, are transforming the construction industry through their business Sphera, by developing sustainable carbon-free concrete without any experience in the sector whatsoever.

Speaking in a quiet room, away from the hub-bub of testing and machinery, and the buzz of their industrial unit in Fishburn, near Sedgefield, County Durham, Natasha says it was an obvious decision for the trio, who have years of experience in scientific research and innovation, including synthetic polymer chemistry, functional surface chemistry and nanotechnology.

Our chat comes just weeks before Natasha and her team moves to a much larger space at Jade Business Park, in Murton, near Seaham, in east Durham.

“Being an outsider, you come from quite a special, naive place,” says Natasha.

“And I think naivety is under-rated.

“If I’m an architect asking another architect what would be deemed a ‘stupid question’, I might be judged.

“But if I’m not from the sector and ask a stupid question, I might just get the answer I’m looking for.

“I actually don’t think any question is stupid – I like stupid questions – and if someone has the confidence to ask a ‘stupid’ question, for me, that’s a strength.

“We started our journey by asking lots of stupid questions and understanding the sector a bit more.

“It’s not worrying about asking the questions that counts.”

And Natasha says the naivety of her, and her wider team, has benefited Sphera’s growth.

She says: “We have zero experience of construction between us, and I think that has been one of our strengths.

“You can start in a job or industry and learn from people who’ve done what they’ve always done and don’t really think about doing things differently – or if you do, you are seen as a disruptor.

“I was very conscious initially that we didn’t have any experience and would think, ‘why are we doing this, because there’s so much to learn?’, but looking back that’s the best way to do it.

“In academia, the longer the words and more complicated the sentences, the smarter you’re deemed, but I never understood that.

“To have someone read something and not fully understand it is not being clever.

“We are three people with zero experience in construction, but we could see what the problem was and thought maybe we could design a material that will help.”

Natasha continues: “One of the biggest challenges in the world is concrete – there’s no debating that.

“It is the second most used material behind water and contributes about eight per cent of emissions; so why would
we not go into that industry to make a positive change?

“We did some research on the biggest challenges and because concrete is quite complex, it tied in nicely with our expertise.

“A lot of innovations now are tech- based and that’s just not us, but materials and physical products we do like – that’s how we started.”

Sphera – a nod to spherical recycling – was founded at Durham University Business School, where the three PhD students came together, to examine the possibilities in the wider world and put their brilliant minds to good use, beyond the laboratories and classrooms (or online).

They were given a project to ‘come up with an idea that would positively impact the world’ and spent two weeks before submitting a business plan and pitching to a panel.

The plan would prove to be the kernel for Sphera’s OSTO-branded carbon- negative aggregate that has attracted the attention of major UK concrete makers ahead of production getting underway this year.

Natasha says: “Construction was not mentioned initially, but we knew we wanted to do something that played to our strengths, so we started something with the materials aspect.

“We made some concrete with different designs, pitched a simple business plan to the judges and thought that was it and that we would carry on with our PhDs.

“But the judges came back and said, ‘maybe you should pursue this’.

“A couple of days passed and I thought, ‘that was actually really fun, imagine if that was life and you get to do it all the time’.

“So I got the guys back together.

“We were still full-time on our PhDs and after hours, in any time we had, we’d be making concrete.

“We mainly worked at university, though Scott did a bit at home, and we basically worked anywhere we could, carrying out experiments and trying to understand it.

“It was quite insane, and to start with nobody knew what would happen.

“It started with a few hours and those few hours increased and the balance started going, but it became clear there was a real need for our innovation.

“Phil and I finished our PhDs in lockdown, a little bit later than expected.

“Scott is still to finish his… but it is very hard work.”

The start-up has received grant funding from BEIS and Innovate UK, and substantial support from Durham University and the Northern Accelerator programme, as well as the Cambridge Institute for Sustainability Leadership, Creative Destruction Lab and Tech Nation.

Natasha is on the UK’s Green Building Council’s Innovative Start-Up Forum advisory board, and was last year named one of Innovate UK’s Women in Innovation, which she says has “opened doors” for the business.

She’s a trailblazer, a rare commodity in the male-dominated construction industry, which is only just starting to open those doors to women.

“It’s something I’m most passionate about,” she says.

“There are a few females emerging, but being a female in the construction industry is tough; people respecting you or even listening to you in meetings in the first place is tough.

“I’ve had meetings where people wouldn’t look at me.

“I didn’t really think about it until I experienced it – but it will never put me off.

“I need to do what’s best for the business and get what we need to achieve from those meetings.

“If I’m faced with discrimination, or someone who won’t talk to me, then we won’t work with them; we want to work with people who are forward-thinking and promote diversity in the sector.

“There will probably be barriers over the next ten years of my career, but it’s getting better and the way people think is changing.

“I’m 100 per cent sure you’ll see more females in construction, and STEM for sure, because it’s a fact; there aren’t many at the moment.”

As part of her Women in Innovation award, Natasha will return to her school in Bedfordshire.

Like her partners, she was the first in her immediate family to go to university, studying at Warwick before moving to Durham.

Without the intervention of Mr McNally, this daughter of conveyancer Steven and hairdresser Sandra might not have made it there at all, never mind with a PhD under her Sphera jacket, standing on the precipice of a revolution for buildings across the world.

“I was in the bottom set for everything,” admits Natasha, laughing.

“I was a hard worker but pretty average, and I wouldn’t say I ever had ambitions to start a business, but then nobody ever talks about setting up your own business as a career.

“There was an option to study triple science at GCSE and the school rejected me because my SATs grades weren’t good enough, but my chemistry teacher Mr McNally said, ‘I’ll have a word with them’.

“My trajectory was not like others, but he told me he thought I could do it, and he asked the headteacher to take a chance.

“He’s one of the most influential people in my life; you don’t realise at that age how important teachers can be.

“He went off syllabus, setting up experiments he didn’t have to do, and really stuck his neck on the line for me and, it sounds silly, but I probably wouldn’t be here without him.

“At that age, having someone say, ‘you can’t do this’, the type of person I was, I would’ve taken their word.

“It took someone like him to say, ‘you are good enough.’

“That was a big moment for me.”

There have been rock climbing expeditions to the Lakes with boyfriend Jonny, a critical care respiratory physiotherapist in Newcastle, and the pair have completely renovated their Durham home and garden (sans Sphera so far), but Natasha admits she rarely switches off from the business.

Her greatest passion, strangely enough, is DIY – which has its advantages for her parents, who have moved to the North East. The first Sphera delivery was to their home for a new garden wall – the first of its kind (apart from the one in the Fishburn unit, which was constructed by a local builder in front of a breeze block wall and is having the daylights tested out of it).

Natasha adds: “I delivered the first two pallets and on the journey over, I thought, ‘this is quite a moment’.

“They were quite happy because they got their free blocks.

“We do all the testing, so I know they’ll be fine!

“It’s all very exciting, and I honestly can’t wait for what the future holds for Sphera.” 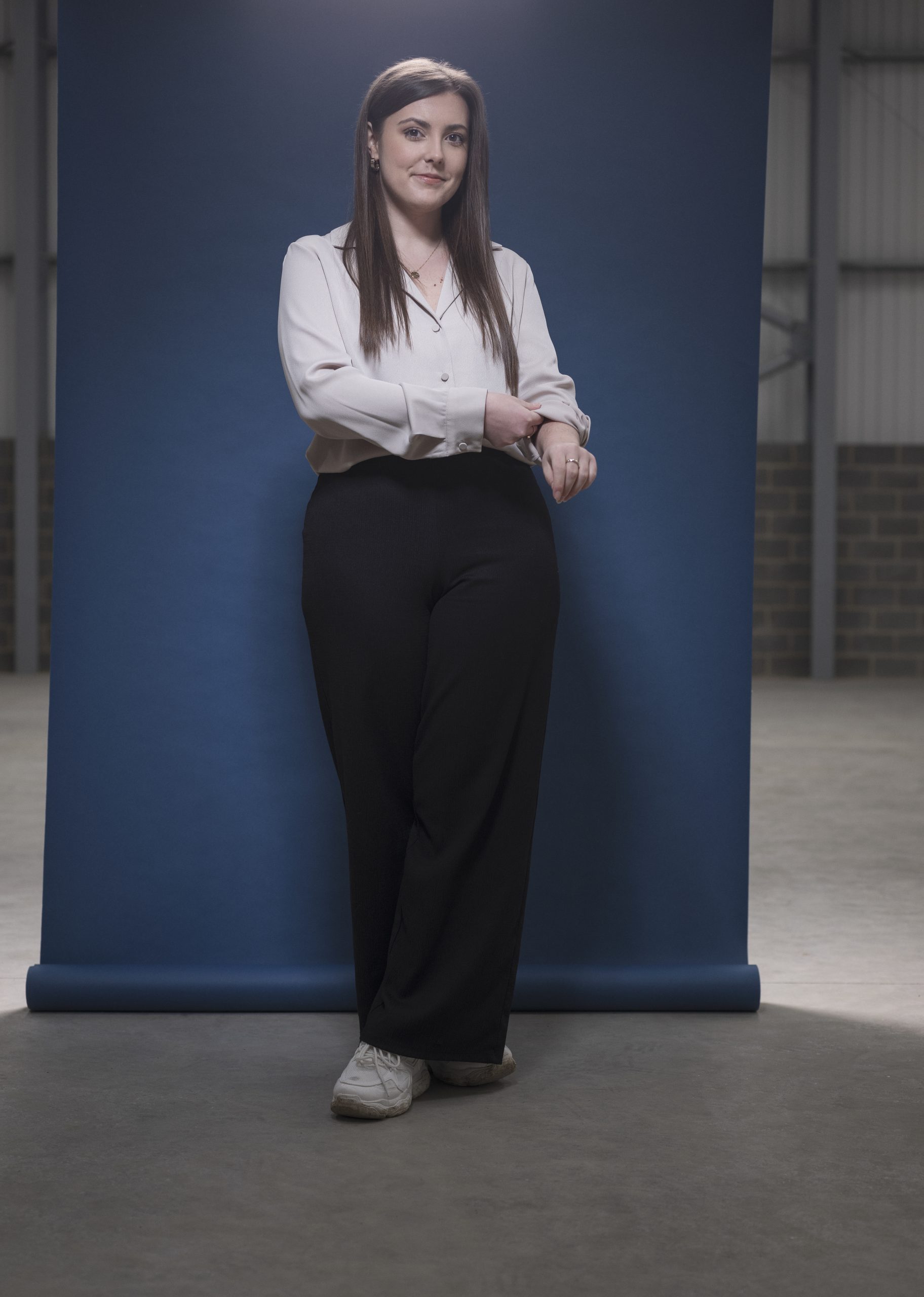 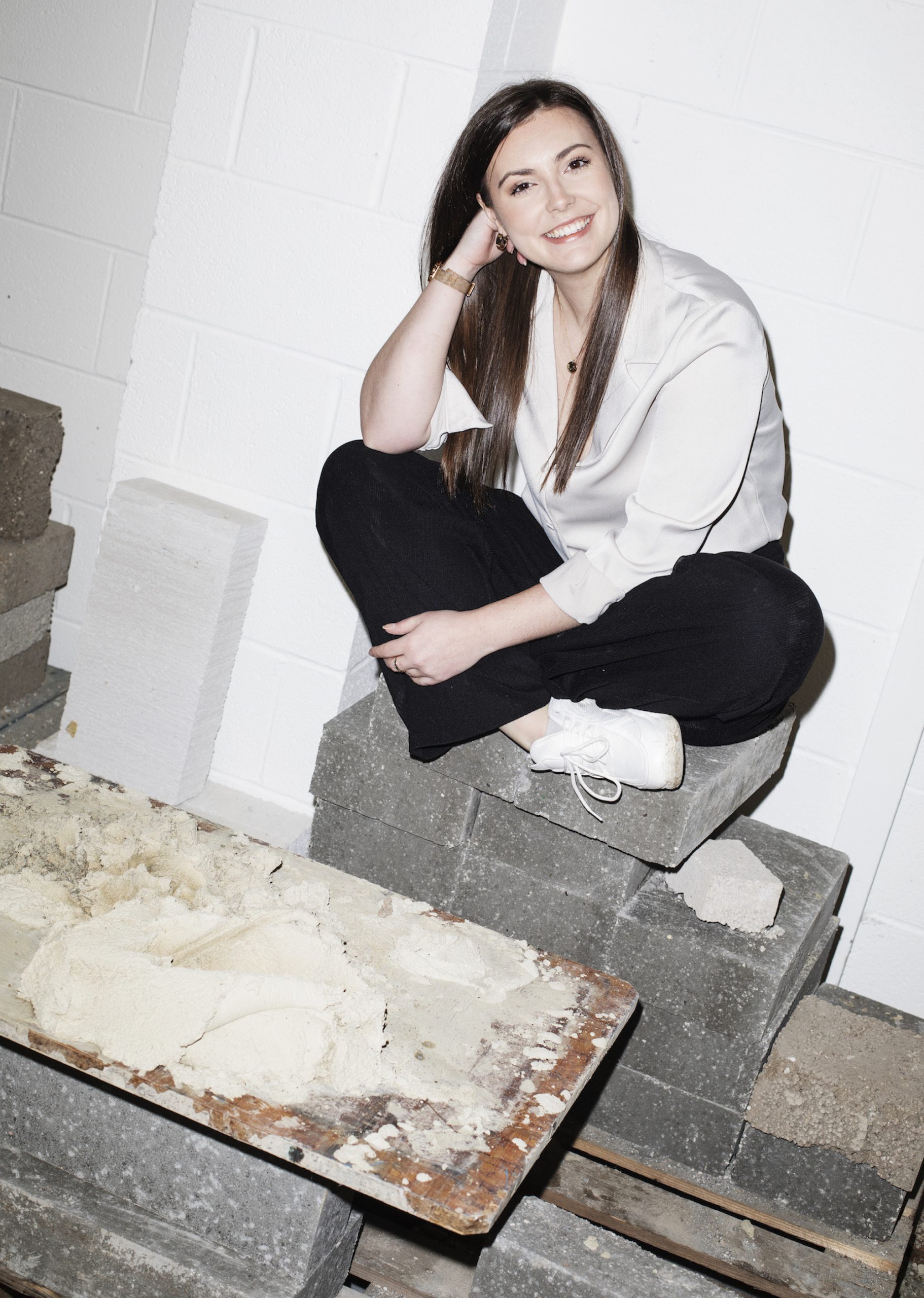