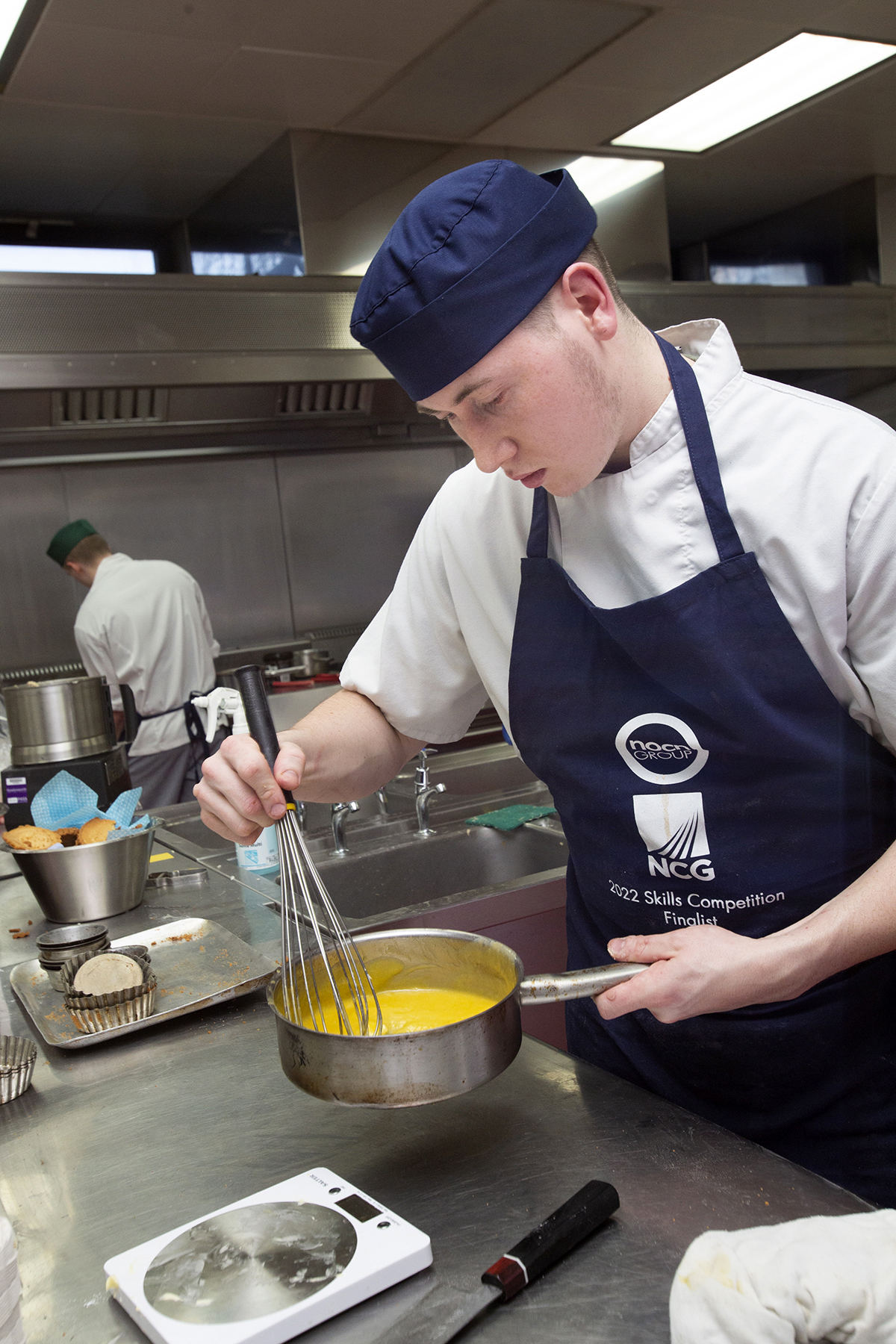 Students and apprentices from Newcastle College showed their talents last week as NCG, the national college group it is part of, hosted its NCG Skills competition finals during National Apprenticeship Week (NAW).

Sponsored by apprenticeship awarding body VTCT and end-point assessor NOCN, the competition gives students and apprentices the opportunity to display their skills, meet employers and have the potential to win a chance to be put forward for a place at the WorldSkills UK competition.

Winner in the kitchen was 19-year-old Anthony Reay from Hexham, who showed off the skills he has acquired as an apprentice at the Hexham-based Michelin star restaurant Hyem. The three finalists – including Anthony from Newcastle College and two learners from Carlisle College, competed to serve the best three course meal for Craig Harney, Managing Director of St Mary’s Inn, Morpeth and Robby Scott, Managing Director of Newcastle-based Babuchos.

Anthony follows in the footsteps of other NCG apprentice chefs bagging jobs working at Michelin-awarded restaurants. Owen Connell from last year’s cohort won NCG Skills before coming in at fourth place in the Young National Chef of the Year competition and going on to complete his apprenticeship at acclaimed Gateshead-based Träkol, where he is now working as Chef de Partis.

Scott Bullock, Principal at Newcastle College said: “The NCG Skills competition offers a fantastic opportunity for our learners to showcase their talents within a range of industries including hair and beauty, plumbing and carpentry. The competition allows students to display their skills to industry specific judges, as well as their peers and tutors, which encourages them to train for success, builds their confidence and connections with potential future employers – providing both motivation and future opportunities. We’re very grateful to the sponsors NOCN and VTCT and to our local employer judges, with whom we enjoy fantastic partnerships.”

Anthony Reay, who won the chef final, added: “I really enjoyed the competition, it was something new and it was good to compete against students from another College. It definitely added value to my apprenticeship, especially because I learned new skills and recipes preparing for the competition. I’m looking forward to using my new skills in my apprenticeship and seeing what opportunities will open up for me in the future.”

The final Front of House competition for hospitality students was hosted at Newcastle College’s in-house restaurant The Chefs’ Academy with a judging panel made up of local business owners. This included Gateshead-based Tom Proud, business owner of the cocktail company Proud to Drink who judged student efforts alongside Roy NG, Head of Operations at Fresh Element, BALTIC who oversees operations at SIX, the River Terrace café, and all wedding hire and events at BALTIC, Gateshead.

Roy studied culinary arts at the college over 10 years ago before he embarked on a journey as an employee of chef and restauranteur Terry Laybourne and Dave Kennedy before joining the BALTIC team.

He commented: “I go around other colleges and Newcastle College really does have a lot to offer, in my opinion it’s the best for hospitality and catering. In this department there is a lot of industry experience – they know what they’re doing. They have a team of amazing people who have a lot of passion, top equipment – it really is a great platform for talent.”

This year the competition was part-virtual so colleges from across NCG could take part, but students from Newcastle and Carlisle competed live in the colleges first-rate facilities.

Newcastle-based Georgina Hunter won the Front of House competition and took home a Sage coffee machine prize. She currently works at Salters in Cullercoats while she studies. On the value of the competition Georgina said: “I like that I got to see both sides, I work in the kitchen normally but doing the front of house competition today gave me more respect for front of house teams. It’s also useful to get feedback from the judges on how to improve.”