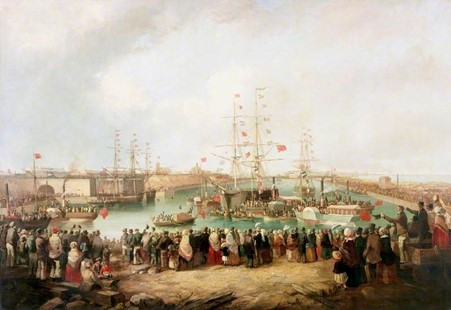 140 years and counting for Sunderland Marine

North East historian Dan Jackson takes a look at the intriguing history of one of the region’s longest-running maritime businesses.

As this year marks its 140th anniversary, I was very pleased to be invited by Sunderland Marine  – now part of marine insurer North P&I, located on Newcastle’s Quayside – to explore the long history of this fascinating business.

As a historian of the North East, I’m always fascinated by the cultural and commercial legacy of our traditional industries, and marine insurance has an important and enduring place in our history.

When I first delved into North’s archive for its 160th anniversary in 2020, I was struck by how closely its story is that of the North East too – especially how dangerous industries led to innovation and mutual support – and how this was based on a deep-seated instinct for co-operation in our region, as well as a fierce local pride.

North now has more than 12 per cent global market share – meaning it insures one in every eight merchant ships on the planet – and through its Sunderland Marine brand, North is also a leading insurer of small craft and fishing vessels.

The story of Sunderland Marine begins in the bustling streets of Wearside in the 1860s.

Sunderland was a Georgian boom town at the heart of the Great Northern Coalfield.

Ships had been built on the Wear since 1346, but the booming coal trade led to an explosion of shipbuilding on 18th and 19th century Wearside.

By 1815, it was already the leading builder of wooden sailing vessels in Britain, and by mid-century a third of the UK’s ships were built in what the Sunderland Herald called ‘the greatest shipbuilding port in the world’.

Competition from the railways led to the development of more efficient steam collier ships, with the launch of The Loftus on the Wear in 1852.

This, in turn, sparked an explosion in all kinds of North East shipbuilding and maritime traffic, exporting coal and manufactured goods around the world.

But this world was still highly dangerous.

Ship losses were frequent, even close to the shore – hence the invention of the lifeboat in South Shields in 1789, the formation of the world’s first Life Brigade in 1864 at Tynemouth, and the reforms of Samuel Plimsoll in the 1870s, who based his analysis of maritime safety on the fate of Sunderland ships.

Local shipowners had formed small insurance clubs since the 18th century, and a group from Wearside’s tight knit commercial community came together in 1882, at the premises of R Hudson & Sons, on John Street, in Sunderland, to form the Total Loss Mutual Steamship Insurance Company.

This coincided with a fishing boom, spurred on by the first application of steam technology to trawling in 1860, when a steamship towed two Sunderland-based sailing trawlers into the rich fishing grounds of the North Sea.

Herring, in particular, was a cheap source of protein which, thanks to the railways, could now be exported quickly to the expanding industrial towns.

Alongside this, the kipper, invented in North Shields, was soon found on every upper-class breakfast table in the land.

By 1916, Sunderland Marine had become the largest insurer of fishing vessels in the UK, and one of the vessels it insured – The Moulmein – was even shelled by confused Russian sailors in 1904, as their Baltic Fleet took the long way round to fight the Japanese in the straits of Tshushima, between Japan and Korea.

The early 20th century saw a global decline in demand for herring, but this was replaced by a new British obsession: fish and chips!

However, the traditional British fishing industry faced growing international competition and, by the 1960s, Sunderland Marine was only insuring 270 British boats.

So, the firm began to diversify and seek new markets, building a presence first in the Netherlands in the 1970s, followed by Australia, Canada, New Zealand and the US in the 1980s – even opening a branch in Alaska in 1996.

And the respect for the industry’s history still continues to shape the marine insurance business.

To this day, members renew their policies on February 20 each year, which is when sailing ships were traditionally taken from their winter lay-ups and made ready for trade with the ice-free ports in the Baltic.

The firm recently ringfenced £40,000 of its North 150 Fund for maritime charities, providing grants for seafarers and their families, as well as much-needed mental health resources for those working at sea.

As North Easterners, we should be proud of that heritage, and how Sunderland Marine and North P&I are continuing and evolving that legacy today.

“Our business has changed with the times, but the dangers and unpredictability of working at sea remain a constant,” says Craig McBurnie, director of Sunderland Marine.

He adds: “We are committed to promoting safety and training initiatives for the fishing community, and supporting the future of the industry.”

As Sunderland Marine enters its 140th year, it can reflect on a proud history at the heart of the region’s commercial life, and its enduring role as a key player in the global maritime sector.