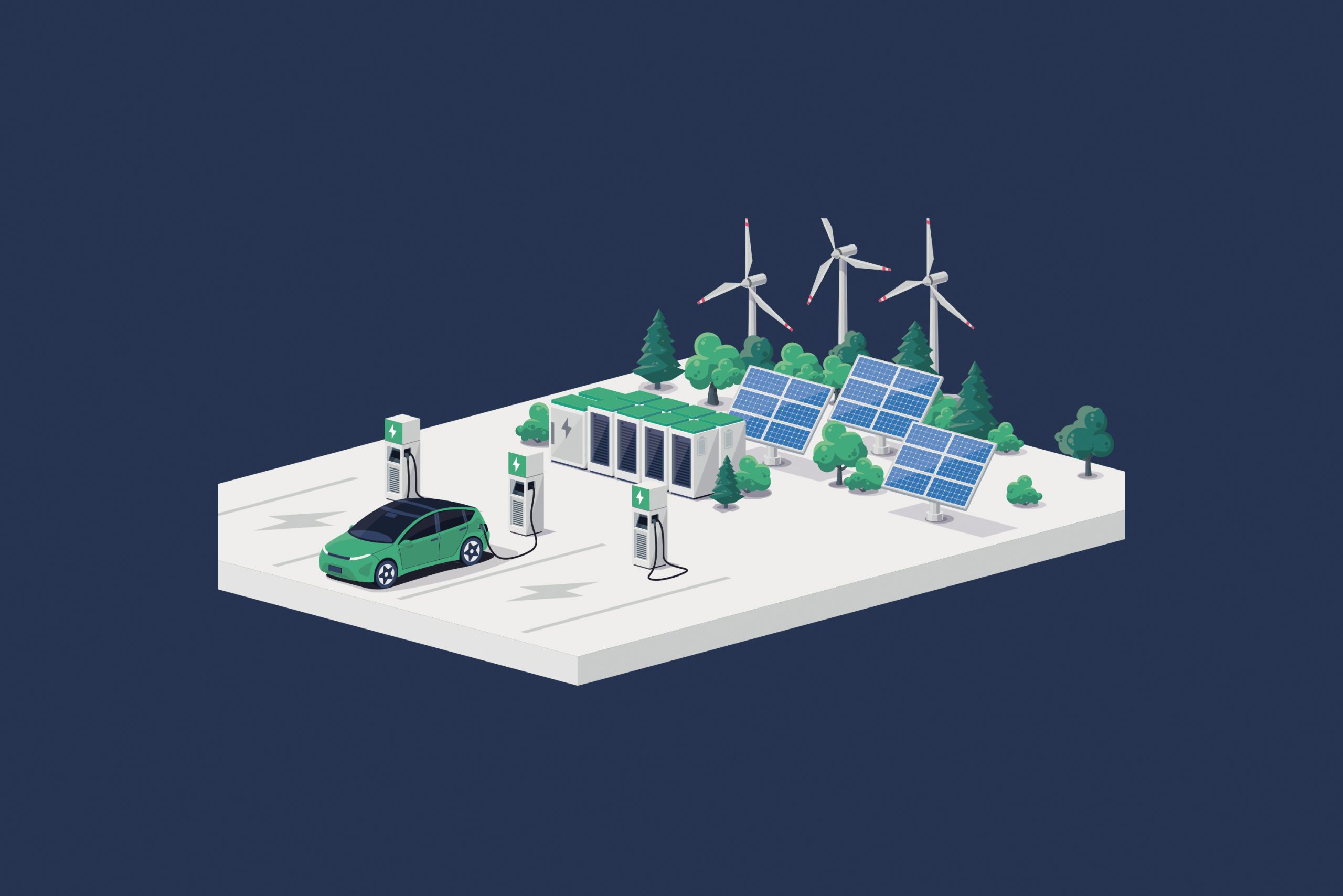 Report: Getting into gear for a greener future

The Stadium of Light, by its very nature, is accustomed to goals.

Last month, though, it wasn’t the sight of footballs rippling the net that dominated conversations in its Montgomery Suite, but targets the automotive sector must hit to meet strict Government net–zero ambitions.

Taken over by a Society of Motor Manufacturers and Traders regional forum, the ground became a hub for discussion around concerted change, with well in excess of 100 guests hearing the views of leading industry players from companies including Nissan, vehicle battery–maker Britishvolt, electric motor manufacturer Advanced Electric Machines and seating firm Adient.

The event laid out a blueprint to deliver Downing Street’s desired new era, highlighting the challenges faced and how the North East – with its skills base and rich history of innovation – will play a crucial role in delivering a full–scale transition from fossil fuels to green power.

The UK’s automotive sector is undergoing watershed change towards a zero–carbon future. Here, Steven Hugill speaks to Mike Hawes, chief executive at the Society of Motor Manufacturers and Traders, about the work required to make the switch a success, and learns from Nissan’s Alan Johnson, Britishvolt’s Graham Hoare and Liv Pearce, and Adient’s Mick Flanagan how the North East is right at the forefront of the drive towards greater sustainability.

When Nissan’s first Bluebird spread its wings from the company’s Sunderland production line in July 1986, it was a doubly seminal moment.

For Wearside, it marked a watershed era of employment and economic opportunity, a fresh industrial epoch for an area in need of rebuilding after the disappearance of its shipyards and the closure of its many pits.

For Britain’s automotive sector, it was an equally pivotal directional change, with Nissan properly muscling in on a market dominated by household favourites such as Austin, Ford, Rover and Vauxhall, after years of sending Datsun–branded cars to the UK.

And ever since the Bluebird (an entirely appropriate name given Nissan’s factory sprawls across land where planes once took off from RAF Usworth, which later became Sunderland Airport) flew the nest, the company’s North East base has grown in stature.

A manufacturing record–breaker – the plant had made ten million cars by 2019, reaching the figure faster than any UK rival – it has also produced the groundbreaking all–electric Leaf hatchback for close to a decade, and was previously home to Nissan’s luxury Infiniti marque.

And its evolution is far from slowing down.

On the contrary, with greener versions of its flagship Qashqai and Juke hatchbacks – both pillars of its Wearside plant – expected to arrive on forecourts in the coming months, the business is at the frontline of efforts to transition the UK’s automotive sector to zero–carbon motoring.

£450 million battery–making plant, which will be operated alongside partner Envision AESC.

Furthermore, with support from Sunderland City Council, a renewable electricity microgrid will be installed to provide power for the car maker and its supply chain on the International Advanced Manufacturing Park, which officials say will save 55,000 tonnes of carbon every year.

“We are facing a once–in–a–lifetime transition – and it is all happening here in the North East,” says Alan Johnson, Nissan UK vice–president for manufacturing.

“And with EV36Zero, we are right at the forefront of change.

“Nissan usually deploys this kind of investment and technology in Japan, and then rolls it out across the rest of the world.

“But not this time – Sunderland, and the North East, is first.

“We have created a wave for electrification with EV36Zero, and we now need to ride it.”

Alan’s final point, though, is delivered through a cautionary veil.

For while Nissan’s endeavours promise to be transformational, they are nevertheless set against the wider context of significant challenges to the UK’s vehicle market.

As the Government presses ahead with a mandate to ensure all new cars and vans are zero–emission by 2035, manufacturers remain at the mercy of a vicious cycle, wherein rising energy costs and punitive business rates are being compounded by an ongoing international semiconductor shortage.

Indeed, according to latest figures from the Society of Motor Manufacturers and Traders (SMMT) for April, the latter was integral to year–on–year new car sales dropping nearly 16 per cent to 119,167 in the month.

And, as Mike Hawes, SMMT chief executive, tells North East Times, the picture is likely to remain difficult for some months to come.

He says: “The industry is facing myriad headwinds and the market is down.

“The order banks show demand is there, but the industry is unable to fulfil orders because it can’t make enough vehicles due to global supply chain and logistics issues.

However, while demand remains stymied, clamour for electric transport, conversely, continues to grow.

Mike says the numbers “provide a bright spot”, but he too adds caution, warning the UK’s infrastructure network needs a radical overhaul, with significant spending on plug–in points – to remove what he calls “charge anxiety” – a key requirement.

“The Government has set a very clear ambition; it wants the UK to be net–zero, and we are making progress – there are now 140 electrified models on the market, for example.

“But we need to see a huge roll out of infrastructure, or the market will be stifled.”

He adds: “We have to drive demand.

“That relates to affordability, but it also relates to answering questions like, ‘can I live with this type of vehicle?’

“Many people can, but the majority of those buying zero–emission vehicles at the moment tend to have a driveway, so they can charge them at home, and about two–thirds of them are business fleet buyers.

“We have to make sure whatever someone’s status, and whether they live in an apartment, a terraced house, a mansion or a country cottage, that they have access to charging without thinking about it, in the same way we don’t think about refuelling at a filling station.

“It’s no longer range anxiety, but charge anxiety, that is stopping some people making the shift.

“The Government is setting targets for manufacturers, but there is no similar compunction on energy charge point providers to keep pace.”

One company doing its bit to ensure the transition is as smooth as it can be is Northumberland–based Britishvolt, which, as North East Times went to print, was expected to this month officially cut ground on its £2.6 billion vehicle battery-making plant.

The company says the factory – based where coal yards once serviced Blyth Power Station, and set to cover the same expanse as 50 football pitches – has the potential to create 3000 direct jobs and up to 5000 supply chain posts by making around 300,000 batteries every year when it opens in 2024.

And the business has wasted little time in making an impact in the marketplace, with blue–chip deals secured alongside Lotus and Aston Martin to develop technology for next generation sports cars.

It also has an agreement with Glencore to create a battery recycling plant, and recently signed a memorandum of understanding with Indonesia’s VKTR to develop a lower carbon supply of nickel sulphate, a fundamental component in its power packs.

Dr Graham Hoare, president of global operations, says: “The North East is where all the action is when it comes to the electric revolution.

“The journey to electrification is going to happen very rapidly, and we can solve charge anxiety with our technology.

“Our plant – which is a real phoenix rising from the ashes – will make batteries for cars and commercial vehicles, and will have a lot of flexibility to develop different technologies in parallel.

“Products will be co–developed and tailored to specific applications, with sports cars, for example, representing a huge segment.

“Some of those vehicles will go on streets and others on the track, and the associated technology will trickle down to aid future development.

“The scale of the opportunity is huge.”

Mike concurs, saying Britishvolt’s investment, allied to that of Nissan and Envision AESC, as well as the region’s powerhouse automotive supply chain, will ensure the North East remains the central cog in the wheels of Government moves to accelerate transport electrification.

He says: “If you look across the UK, there are hubs of activity, and the North East is undoubtedly one of those.

“The region is hugely important to the UK’s decarbonisation agenda and increased electrification, and its latest developments are going to put it in pole position when it comes to the transition.

“At the end of the day, if you’re part of a global organisation, you want the best place to do business.

“And the North East, for many years, and for many companies, has been that place – and with investments like those from Britishvolt, Nissan and Envision AESC – it will remain so.” “Britishvolt is bigger than just batteries. We want to create long–term relationships with partners for a sustainable future.

“We have created the FutureGen Foundation, to develop and support pathways to employment. It will provide training to people who have relevant experience but who need a bit of support, train people with no experience in an area, and help too with literacy, IT skills and things like CV writing.”

“The big bang for us is going to come from sustainable product development. We are on a journey, from a business perspective and from a moral imperative, to protect the planet. We’ve introduced a product carbon footprint tool to assess emissions from existing operations, and are looking at green steel alternatives.

“We’re also working to find sustainable alternatives to animal leather, with options including potential use of cactus and pineapple leaves, and even apple skins.”