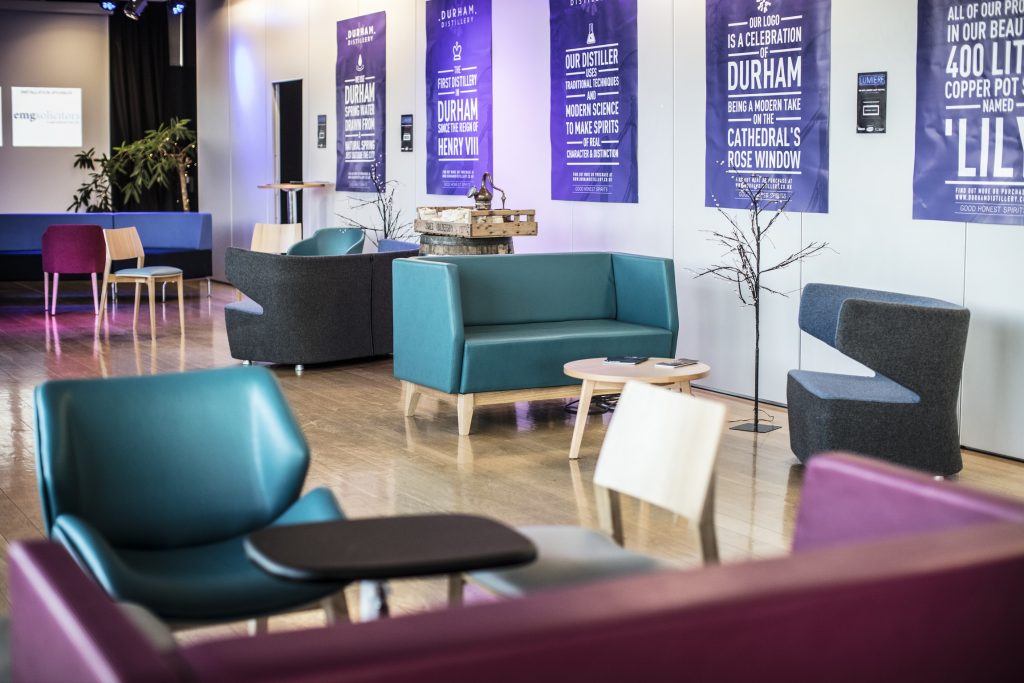 Godfrey Syrett donated £20,000 worth of furniture to the Durham Lumiere festival, which took place last week

The design-led furniture manufacturer, which has a distribution hub at Belmont Industrial Estate and a manufacturing site at Langley Moor, supplied the furniture for the festival’s Durham Distillery VIP Hub, used by Lumiere Durham supporters.

The furniture, which included a selection of soft seating and tables taken from Godfrey Syrett’s ranges of workspace furniture, will now be distributed between Durham Distillery and colleges at Durham University.

Godfrey Syrett, which is celebrating its 70th anniversary this year, has been shortlisted for a number of design awards for its products such as Zip, a modular furniture solution which zips and unzips to be reconfigured into a variety of layouts.

To mark the anniversary, the firm recently launched a commemorative range of minimalist tables and stools, named Ken and Harry after the company’s founders, Ken Godfrey and Harry Syrett.

Mark Dixon, CEO at Godfrey Syrett commented: “We are very pleased to support this fantastic event which not only attracts visitors into the region but is also tremendously popular with the North East community.

“At Godfrey Syrett we are committed to excellence and innovation in furniture design so we are proud to be part of an arts festival which showcases one of region’s most attractive destinations.”

Carolyn Ramsbotham, part of the team behind Durham Lumiere, said: “We are very grateful to Godfrey Syrett for their extremely generous donation of furniture for the Durham Distillery VIP Hub.  Their support for this popular event is hugely appreciated.”

The four-day Lumiere event, which took place in Durham for the fifth time from 16th to 19th November, featured 29 light installations located throughout the city.

Artists from around the world created the works which included light projections onto the city’s cathedral and the River Wear.

In October, Godfrey Syrett also donated furniture to West Moor Community Centre in Newcastle and in recent years the firm has raised over £15,000 for local charity, Children North East.