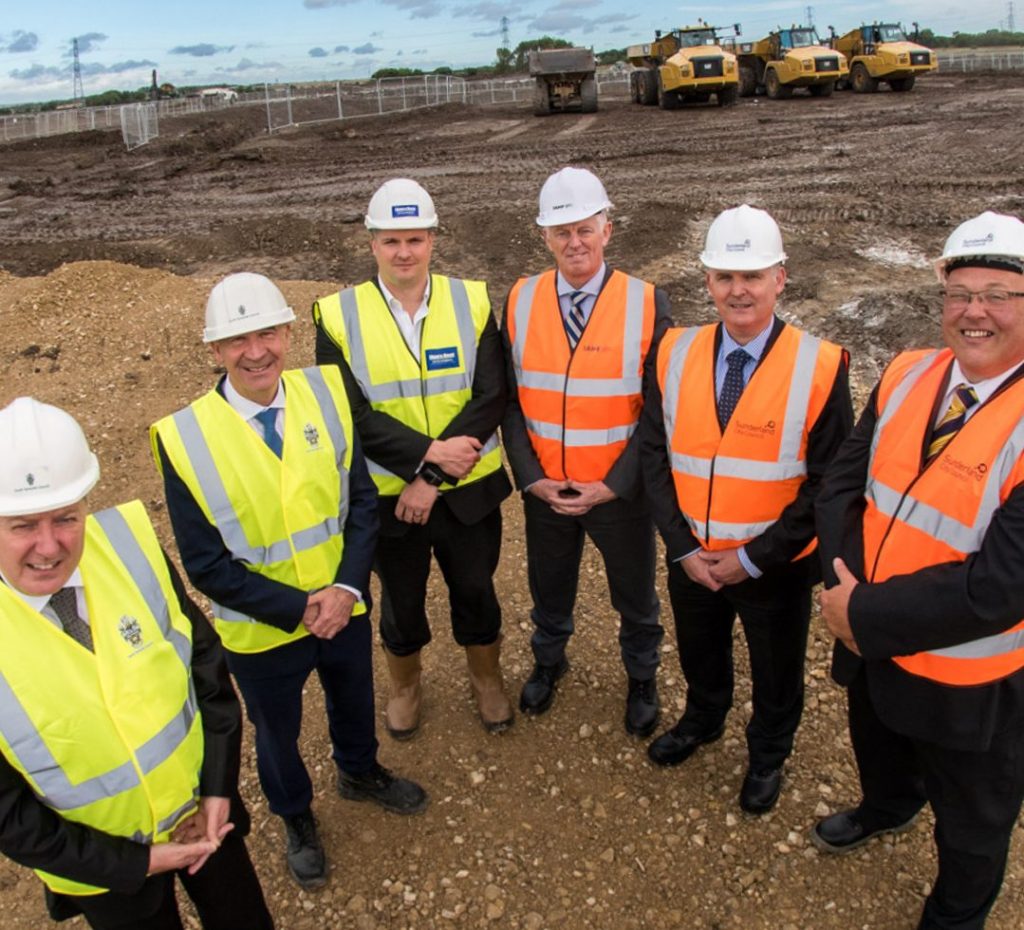 Planning permission was granted for the development of phase one of the International Advanced Manufacturing Park (IAMP) in May, and now preparatory work has started on-site, ahead of an expected announcement of a flagship investor.

Sunderland City Council’s Highways Operations Delivery team has already established an access road to the site, and groundwork is moving forward to prepare for the construction of the first factory on site.  It is understood that an announcement will be made soon to confirm the first company that is committed to developing a facility on the park.

The IAMP is being built on a 150-hectare area of land, north of Nissan that sits between Sunderland and South Tyneside authority areas. The councils are working together, alongside development partner, Henry Boot Developments, and will move forward with phase one of the site, which will see 50 hectares of the estate transformed into a manufacturing hub, with phase two expected to follow soon after.

Over the next ten to 15 years, the park will support more than £400m of private sector investment, creating over 7,000 jobs.

Councillor Graeme Miller, Leader of Sunderland City Council, said: “Now that the initial round of preparatory work is underway, we expect to see this hugely significant development move forward quickly.

“IAMP is one of the most significant developments that the region has seen in decades and will play a crucial role in rebalancing the North East economy.  The vision and hard work of South Tyneside and Sunderland councils to secure a deal that will bring huge economic benefits will soon bear fruit, and it’s fantastic to take such a major step forward.”

“Over the coming weeks, people will start to see a lot more activity around the site – the first signs of what will be a truly game-changing manufacturing district,” said Councillor Iain Malcolm, Leader of South Tyneside Council.

“IAMP will be a world-leading advanced manufacturing hub, creating thousands of jobs, and will be truly transformational for the North East economy.  We look forward to seeing IAMP quickly begin to take shape.”

Plans for the IAMP emerged after Sunderland and South Tyneside local authorities signed a City Deal agreement with the UK Government in 2015. The site has attracted more than £41m investment through the North East LEP’s Local Growth Fund towards infrastructure including new roads, bridges and environmental enhancements to support the development.

The ambition of the site is to create a locally-based supply chain for OEM, Nissan, as well as building on the area’s strengths in advanced manufacturing.

David Land, North East Local Enterprise Partnership board member, said: “Advanced manufacturing is one of the strongest performing sectors in the North East, which is why growing this important area of industry sits at the heart of our Strategic Economic Plan.

“The IAMP will create more and better jobs for our region and help grow the economy. It will be a key strategic site for the advanced manufacturing industry both regionally and nationally.

We’re delighted to support the project through the Local Growth Fund; a £270m capital programme that supports new strategic economic assets and infrastructure sites across the North East.”

Tom Wheldon, Regional Manager at Henry Boot Developments, which was appointed by Sunderland City Council and South Tyneside Council to lead the development of the site, said: “IAMP represents a unique opportunity for potential occupiers – with unmatched power capabilities and connectivity, bespoke purpose-built facilities and a skilled local workforce, there will be no better location for advanced manufacturing businesses.

“Conversations are underway with potential occupiers so we’re keen to hear from businesses interested in being located at IAMP – we have a number of plots available at IAMP ONE which can accommodate purpose-built units from circa 50,000 to 500,000 sq ft.”The £270.4m Local Growth Fund, secured as part of the North East Growth Deal, supports the North East LEP’s delivery of the Strategic Economic Plan, which aims to create 100,000 more and better jobs by 2024. For more information about the Local Growth Fund visit www.nelep.co.uk/funding.

To find out more about IAMP, visit www.iampnortheast.co.uk.