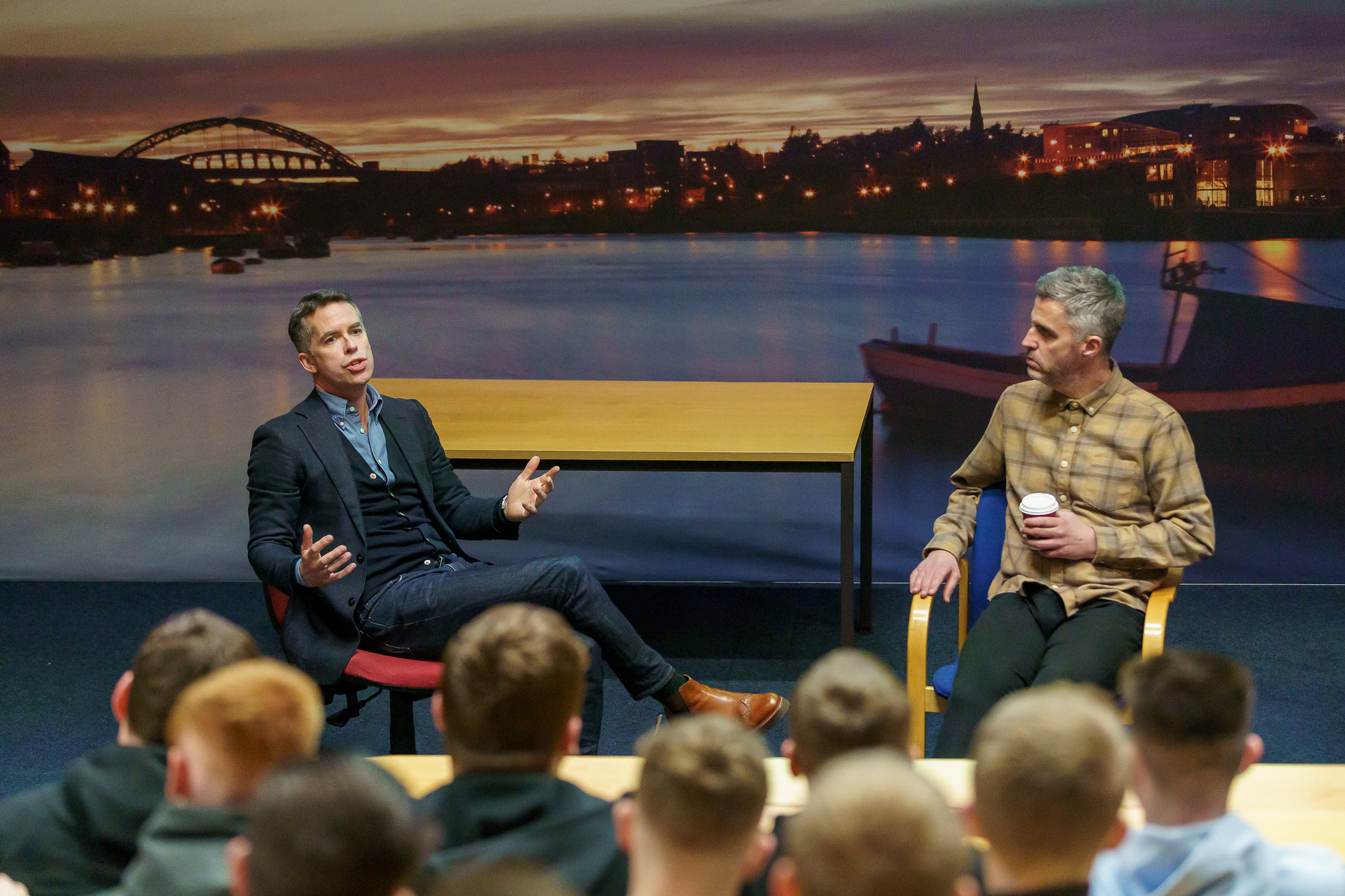 University journalism students were encouraged to shoot for their career goals during a talk from a recognisable TV football presenter.

Sky Sports’ David Jones visited University of Sunderland to share his experiences of life with the satellite broadcaster – and inspire potential employees of tomorrow.

Closer to home, David is a lifelong Sunderland AFC fan and in 2019 became a non-executive director at the Stadium of Light, taking responsibility for club business such as player and manager recruitment.

He made time between back-to-back Premier League games and a midweek match at Sunderland to be grilled by journalism students at the University’s Sir Tom Cowie Campus at St Peter’s on his career, life inside Sky Sports, his role at Sunderland – and what it’s like to take charge of superstar pundits like Roy Keane.

David said: “I hugely enjoyed my visit to the university, meeting the students – and being on the receiving end of some tough questions for a change! “It’s clear there is some serious journalistic talent at Sunderland, which is great to see at the university bearing the name of a city so close to my heart.”

David began his own career as a news reporter with the Derbyshire Times, in Chesterfield, turning to sports journalism after being given the job of writing a piece on Middlesbrough FC – the club closest to where he grew up in North Yorkshire – ahead of it’s 1997 FA Cup semi-final against Chesterfield FC.

Having then performed several editorial roles at Sky Sports News after joining for the channel’s launch in 1998, David switched to a role in front of the camera, and has now anchored more than 1000 live matches, and presented Super Sunday and Monday Night Football for six years.

“I’m delighted to pass on any insight I can to students who share the passion I had when I was dreaming of a career in journalism,” he added.

“I’d like to think that I will catch up with some of those students again one day, whether it’s when they’re working in the press box at the Stadium of Light, another big sporting venue or at Sky Sports.”

“I have grown up glued to Sky Sports’ football coverage, so it was brilliant to hear about life in the studio, including some great stories, as well as listen to David’s advice on pursuing a career in sports journalism, and learning about his work at Sunderland.”

Neil Farrington, BA sports journalism programme leader, said: “We are hugely grateful to David for giving up his time for what was an invaluable – and should be a very motivational – talk.

“As well as giving us invaluable insight into top-end sports broadcasting and his experience – along with some fantastic anecdotes – he also made clear the sheer enthusiasm he clearly still has for sports journalism, after a long and illustrious career.

“It’s also hugely reassuring to knowing that Sunderland AFC, with whom we work very closely, have someone with his passion, experience and expertise pushing them forwards.”